This year’s GDTA Annual General Meeting was a celebration of 45 years of the Great Divide Trail Association. It was exciting to see so many members of the original team that surveyed the trail and that started the Great Divide Trail Association in attendance. This included  Jenny Feick, Dave Higgins, and Mary Jane Kreisel (nee Cox), who were part of the ‘original gang of six’ who surveyed the route in 1974 and Jeff Gruttz, Lani Smith, Desmond and Peter Allen, and Chris Morrison who helped set up the GDTA in 1975/76. 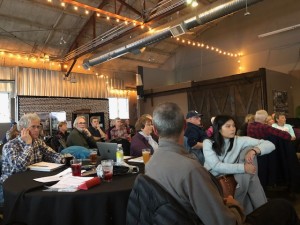 For those that missed the AGM, below is a summary of Jenny’s talk.

Jenny Feick shared the story of Project: Great Divide Trails and how it was an adventure of a lifetime for all six of the crew 45 years ago.  First, to provide some context, she took the audience on a trip back in time to 1974, playing music from the mid-1970s and reminding everyone about what was going on in the world and in Canada, politically, economically, socially, environmentally, and with regard to long-distance trails. She then described the first proposals for a Great Divide Trail in the Canadian mountain national parks made in the 1960s. This included the one developed by Jim Thorsell and approved in 1970 by Jean Chretien, Minister of Indian and Northern Affairs at the time. Jenny told the crowd about how Jim Thorsell inspired Cliff White of Banff to promote the idea for a trail survey and feasibility study for a Great Divide Trail route linking Banff and Waterton Lakes national parks. She explained how she and the other young people got involved, and how they successfully obtained a federal Opportunities For Youth (OFY) grant to fund the project. The majority of the presentation focused on the project’s ambitious mission, challenging logistics, and the extraordinary amount of field work conducted despite enormous obstacles and without all of the communications and route-finding methods we take for granted today. Jenny shared a few of the hair-raising and funny stories about the crew’s adventures. She revealed the project’s findings, not just the 5000 km surveyed, 166 trails described and the options developed and mapped for GDT routes, but also how the crew brought to light the devastation resulting from resource extraction activities in the headwaters of the major rivers of western Canada. Lastly, she outlined how Project: Great Divide Trails led to the establishment of the Great Divide Trail Association and applauded the work of the current GDTA volunteers. 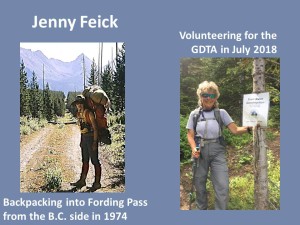