Charlie Russell spoke to a sold out crowd of hiking enthusiasts, GDTA supporters, Girl Guides, Scouts at the John Dutton theatre in Calgary on March 21st. 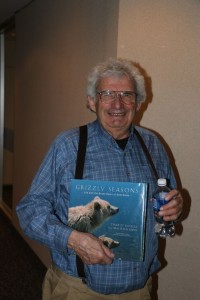 Charlie Russell has spent the better part of 55 years studying and living with grizzlies and his philosophy boils down to: “They (grizzly bears) will trust you, if you trust them.” What makes Charlie Russell’s bear theories very special is that he not only talks about his ideas he has put them into practice. Against the advice of almost everyone he famously lived with grizzlies in a lengthy experiment in the rugged bear country of Kamchatka Peninsula on Russia’s Pacific coast.  For close to a decade he lived among a 400-strong bear colony.  The only “weapon” he carried was bear spray and he only used that to keep the mature male bears away from some orphan cubs he had rescued from a zoo. 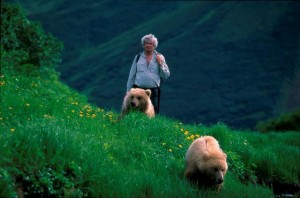 He stayed with the Russian bears for six months a year and spent the other six months raising money worldwide to keep the experiment going.  He even built and flew his own airplane to assist in low-cost aerial surveys and to provide remote access. “I was more likely to be killed in my own airplane than attacked by a grizzly bear.”

Charlie Russell says his experiment proves grizzly bears are not dangerous if unthreatened and understood by humans.

Charlie shared many moments from his time raising the grizzly bear cubs and when asked about a most inspiring moment said that it was every day, “Just imagine taking these three cubs for a walk in the wilderness every day, so many beautiful times, it was incredible.  They’d come galloping up to go for a walk and then off we would go.” 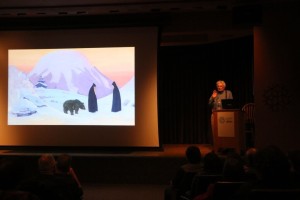 Charlie had this advice to give about encountering a bear while hiking: “If the bear was aware of you with lots of notice, get off the trail.  Bears like the trails too, it’s easier for them to walk.     If, however, you surprise a bear, you’d better have your bear spray ready.  They may go into protect mode and view you as a predator.”

Russell acknowledges he was once attacked by a black bear near his ranch. He says he was saved by his son, but insists “I’ve always blamed the attack on myself”.  He says he did not show the bear sufficient respect and tried to shoo it away when it blocked his path. Instead of running, the bear, presumably feeling threatened, attacked.

The GDTA invited the Calgary Girl Guide Rangers to be their guests at the event on March 21st.  It’s a little known fact, but the Girl Guides of Canada dreamed up the idea of the Great Divide Trail. In 1966, the Girl Guides were the first on record to propose a trail running the length of the BC-Alberta border through the Rocky Mountains, a trail that is now known as the Great Divide Trail. 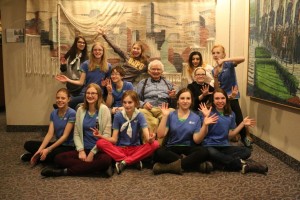 The Rangers from the 72nd Pathfinders Calgary attended the event and had this to say about Charlie’s talk:  “It was the opposite of what I was expecting… it was so much more meaningful and interesting than anything that we’ve seen before on bears.  I felt like we got to know them as people.”

The event was sponsored by DIRTT Environmental Solutions.  All money raised from ticket sales went towards the completion and long term protection of the Great Divide Trail.