by Bethany Hughes and Lauren Reed

The women of Her Odyssey, Bethany ‘Fidgit’ Hughes and Lauren ‘Neon’ Reed, are in the midst of a multi-year endeavor to travel the length of the Americas by non-motorized means. Their aim is to connect the stories of the land and its inhabitants, and to share what they experience and learn, with friends and followers around the world. Since beginning in 2015 the two women have covered over 20,000 of the proposed 30,000 km journey from Patagonia to the Arctic Ocean. 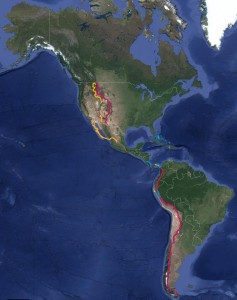 They began hiking from the Beagle Channel in November 2015. From bushwhacking and route finding through the southern cone, their route quickly took up the Greater Patagonian Trail, a long-distance route network in the southern Andes that spans 3000 km, from Fitz Roy, in Los Glaciares National Park, Argentina, to the outskirts of Santiago, Chile. The women were able to contribute to this route by being the first to ground-truth a 1000 km stretch of the Andes from remote borderlands, volcanoes, across estancias and mining complexes, through heritage forests, and into the heart of the bustling metropolis of the capital of Chile. 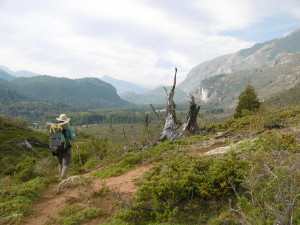 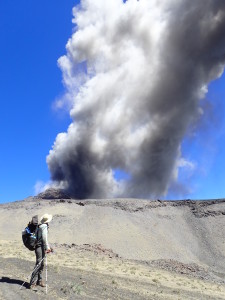 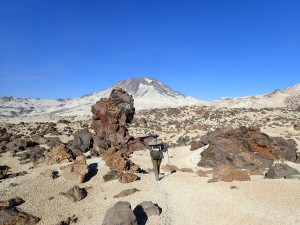 Volcanoes Along the Greater Patagonian Trail

The second year of hiking, the route connected from the nascent Greater Patagonian Trail to the ancient Qhapaq Ñan, the footpath/road system of the Inca Empire. Approximating this route led the hikers onto the alti-planos, rising to above 4000 m in elevation from Argentina, across Bolivia, Peru, Ecuador, and descending into Colombia. Along one stretch the women joined forces with the Waterkeepers Alliance on the Marañon River and paddled 530 km of the wild river which inspired Ciro Alegría to write The Golden Serpent, a portrayal of Peruvian life along the river. 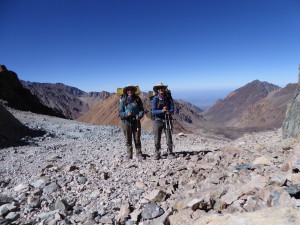 The Women Atop Portillo Pass, Between Chile and Argentina in the Andes, Just East of Santiago, Chile 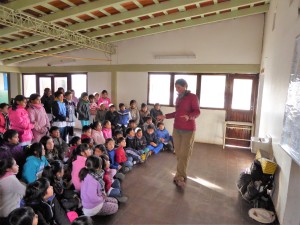 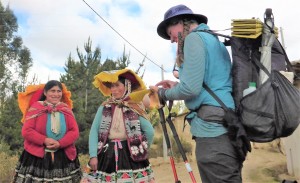 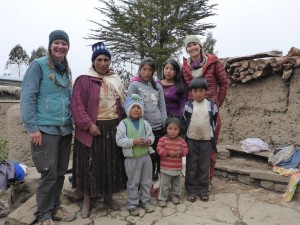 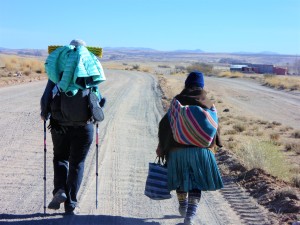 Fidgit Walking with an Aymara Woman, in the Alti-Planos (high plains) of Bolivia

In Peru, Hiking the Quapac Nan, the Inca Road System 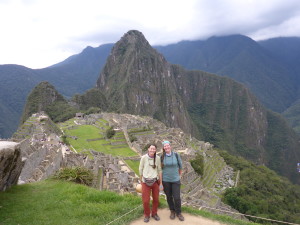 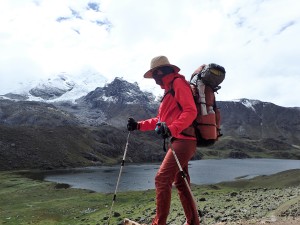 Neon Hiking in the Huayhuash Range – 30 km of High Snowy Mountains, with 7 Over 6,000m, in the Peruvian Andes

In the third year, they arrived to Turbo, Colombia, becoming the first women to hike the length of South America. Central America held many lessons, as their aim to stay off roads led them into complicated political and remote jungle areas. In the end they teamed up with Trak kayaks and reversed route for a section to paddle from Lake Nicaragua down Rio San Juan, along the Caribbean coast of Costa Rica and Panama and back into Colombia, reconnecting to their South America route which had ended at Turbo. Thus, finally successfully crossing the Darien Gap after three previous efforts.

Balancing seasonal changes between the hemispheres on the fourth year of the journey, the women again chose to reverse course in 2019. While Fidgit thru-hiked the Continental Divide Trail southbound from the Canadian border, Neon, already a Triple Crowner (AT ‘08, PCT ‘10, CDT ‘13), bikepacked the new Wild West Route. In January 2020 the women came back together in San Diego and began bikepacking the Baja Divide Route. They connected this route back to mainland Mexico and pedaled as far south as Aguascalientes in the Sierra Madre Range before international reactions, and health and safety concerns due to COVID-19, prompted the women to return to the United States. 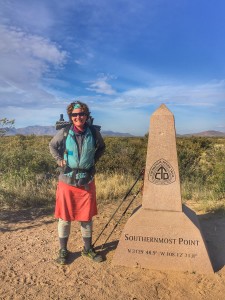 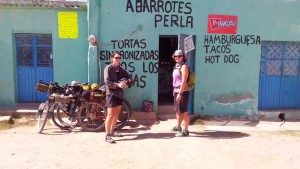 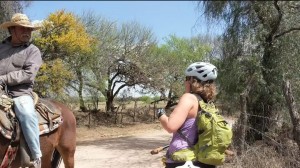 Fidgit Getting Directions from a Rancher in Mexico 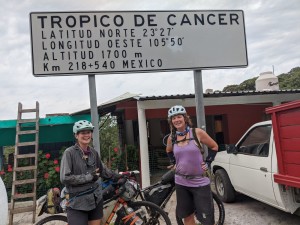 This decision, like many on the Her Odyssey journey, was made with community in mind. It happened in Parroquia Santo Domingo in Zacateas, when a tiny abuelita came to speak with them, insisting on all she wished to share. The women here realized the decisions were not only for themselves but for all of those they would meet. Since the route through Mexico was largely through rural areas, and rural in that area means aged individuals with limited access to clean water, the decision was not about the integrity of the journey so much as it was about the wellbeing of the people who make the journey worth the effort.

Much as the decision was made in honor of the community along the route, it was informed by the community who support the odyssey. Designated safety and health personnel advise the traveling team on strategy, and their supporters and investors assist them in the ongoing financial demands of this endeavor. Since getting off route, the women have returned to their homes and have been baking, gardening, ranching, and laying plans to continue northbound once snow, borders, and health and safety concerns allow. They anticipate crossing Canada will take at least two northern summer seasons, between which they hope to return to Central America and finish connecting their South and North American routes.

The women are looking forward to hiking the Great Divide Trail, the northern terminus of which is about 100 km from the beginning of the Arctic drainage at the Parsnip River. Their aim from there will be to paddle the Parsnip into Williston Lake, which connects to Peace River, into Athabasca Lake, into Slave River, then the Great Slave Lake, which leads to the MacKenzie River, the mouth of which pours past Tuktoyatuk, into the Beaufort Sea and the Arctic Ocean. Their aim for summer 2020 will be to complete the GDT and as many sections of paddling as possible before storing gear for the winter season and returning summer 2021 to complete the six year, 30,000 km journey.

Beyond the physical journey, the Her Odyssey women pursue a number of projects and aims. Primary among these is to share the stories and experiences with an ever wider audience, thereby forging connection between communities. They do this by writing blogs about the journey and those they meet, posting videos and pictures on various digital platforms, contributing writing and photography to other pages, in person talks and presentations, education outreach efforts, and teaming up with companies and contributing to non-profits they see at work on the ground. Much like the journey itself, whatever paths open up before them, they explore.

Even more than the ground covered (which is saying something because many of these 20,000 kilometers have come hard earned), the greatest challenge is to balance these various fronts: personal development, team work, community building, while writing and sharing with a public audience. They do this work because they believe that finding common ground and connection between ourselves and with the planet is a moral imperative. If the objective is to encourage people to connect with the world around them and to pursue their dreams, the Her Odyssey team must lead by example. They aim to find a balance and consistently check in about decisions with their Core Values.

The objective is to cross the length of the Americas by non-motorized means but they do this in service to a belief in the power of connection and community. So they forge forward while trusting the process, respecting the boundaries, adapting to what nature fosters, and with gratitude for beauty and hardships alike. The two women are excited to hike the Great Divide Trail, impressed by the wealth of information and resources which have long made this particular segment of the Her Odyssey journey something worth looking forward to.