Summer of 1975, my most frightening and embarrassing hiking moment

It was a beautiful calm, warm summer weekend, so we, Glen Byers, Kim O’Brien and myself, gathered at Byers house to plan a weekend hike. Weather looked great, not a cloud in the sky on Friday evening as we made plans to drive down to Crowsnest Pass area in my Red Volkswagen Beetle, named “Sparky”. It was getting late and we were all getting hungry when Mrs. Byers offered us a wonderful supper before we left Calgary. We headed out right after supper. The sun was setting now and we still had a three hour drive ahead of us, and then realized we’d be setting up our tents in Allison Creek Campground in dark.

We arrived after midnight. Sky was clear and full of stars shining brightly, with only a sliver of a moon partly glowing to shed us only a dim glimmer of light. All the campsites seem to be already taken and we didn’t spend a lot of time searching because we didn’t want to disturb and wake up a sleeping campground. We parked close to the picnic shelter and discovered it was empty. The entire campsite was in sleep mode, not a campfire was glowing, all campers were tucked away for the night. We tiptoed quietly around and decided not to spend time making noise in pitching our tents, so we collectively decided to crash in the Picnic Shelter and sleep on top of the tables inside. Quietly we gathered our stuff and laid out our mats and sleeping bags onto the tables, and whispering goodnight to each other, drifted off to sleep soon thereafter. The entire campground was very peaceful, dead asleep, absolute silence.

It seemed like a few hours of deep sleep drifted by when, still in a sleepy daze I swatted my face from an annoying itch. Being so tired from a long day and a long drive, I laid my head back on the pillow and I was out like a light.

Later in pitch blackness, dead calm night, I heard the utmost, loudest, high pitched blood curdling scream that I have ever heard in my entire life.  It sounded like some young teenager was being bludgeoned to death! I could feel my heart loudly pounding in my chest. I instantly sat up, blurry eyed, glimpsed around seeing Kim literally head first, dive from her sleeping bag right through the window. Glen in one motion, just like a cartoon character, instantly sprang from lying flat out on the table to hanging upside down desperately clinging to the rafters all in one super swift motion.

“What from scary hell is happening”, both my friends screamed at me.

Well, a few short moments before, me dead to the world in sleepy land, I had felt a second itch on my face and with my eyes still shut, I instinctively had swatted what I thought was an annoying mosquito. Two seconds later, a cold, clammy feeling had slowly spread over my entire face, cheeks, nose, and mouth getting covered over, tiny little claws grabbing and digging into my cheeks.  I  S-L-O-W-L-Y had opened my eyes only part way, and had seen a creature staring right back at me. Then, only to my surprise, I released a high pitched, blood curdling scream that woke up the entire campground of a hundred or so campers, all immediately sounding car horns, banging pots and pans, in unison yelling and screaming as if their own life was in danger of a wondering attacking Bear. All clambering together, making as much noise as possible to scare off this huge frightening creature.

Glen and Kim could not contain their uncontrolled laughter, Glen still clinging, hanging upside down on the rafters, laughed so hard he lost his grip and fell back onto the picnic table and stilled laughter. Kim, came running back in, stared and laughed so much she was literally rolling on the ground laughing.

Glen called over to some inquiring campers that the bear left, ran away, and the danger was gone. Another hour went by before my friends and the entire campground regained themselves enough so we could get back to sleep. 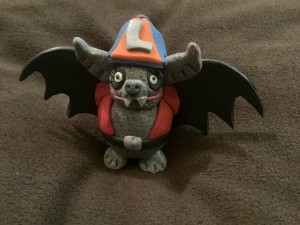