Wendy Ryan is both an avid horseback trail rider and a GDT enthusiast. From Pincher Creek, Wendy has enjoyed time on the GDT over the years, joined the GDTA, and believes in the GDTA’s commitment to preserving, promoting, and maintaining the GDT. She is also interested in horse travel on the GDT. Towards this, last year she and a friend spent time riding their horses in the Beehive area. Among the beauty, they also came across a rather junked-up old outfitters camp at the High Rock GDT campground, a popular camp with hikers despite the heaps of old junk. Wendy wanted to gather up some fellow horse packer friends and clean this mess up. And this summer they did it! Here’s their story…

Starting out with ten riders and their horses, eight packhorses, and one mule, we had a successful weekend horse packing up Soda Creek to the Beehive Mountain, and riding along the Great Divide Trail. Not sure when the last horse pack trip would have been up into that area with that number of outdoor horsemen/women, if ever! What a sight 🙂  No trip could be ridden along the GDT without riding into Little Bear Lake, and enjoying the peaceful and beautiful view of our surroundings. 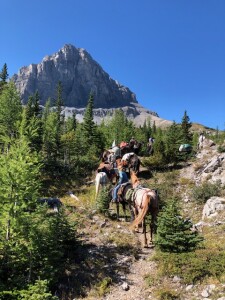 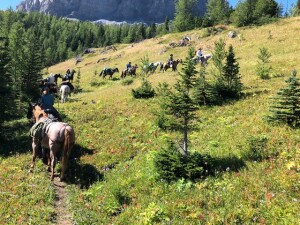 Although already mid afternoon, this was our lunch spot.  A few keen people wanted to clear the trail for better travel and in not much time that was completed and far more enjoyable to ride. About 1 km in total distance was cleared. Many hands make light work. Memory Lake became our base camp for the three days and two nights, and what a perfect setting. The shallow lake is more of a pond – no more than 30 cm deep, so for our drinking water we walked back south to the headwater creek of the Oldman River. 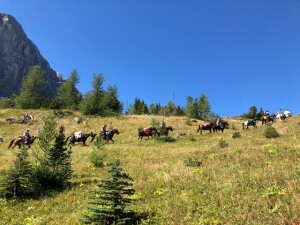 Day 1 – The majestic horse pack train spreads out in the high country under clear blue skies – what a sight!

Day 1 – Passing Beehive Mountain, onward to set up base camp at Memory Lake

The next day seven riders headed up the trail onto the Mount Gass old road and the GDT hiking trail to head for the old outfitters camp about 5 km away. Since three people had to leave camp for home, as they had work or other commitments, they left shortly after us, following the main road down to the valley and the vehicles, about a 2.5 hour ride. Unfortunately on the way to the old outfitters camp, one of the main horses became ill. So Mac swapped out riding horses with Wyatt, and then Mac walked the sick horse back to our base camp. It was thought that it could have eaten some of the plentiful Death Camas in the meadow. One section of the trail back to base camp was a bit ugly with a steep down trail, and therefore making for a steep up hill on the way back to join the group headed to the outfitters camp! All went well both ways.

Since last August when James Tweetie and I rode this section, many more trees have come down, and the chainsaw was not taken as the battery packs were not useable! Perhaps another trip to clear the downed trees. Same for the Soda Creek trail to the high GDT trail.

Once we got to High Rock campground (the hiker camp at the old outfitters camp), everyone flew into a flurry of activity. One person took on hand sawing all the old broken corrals up for future firewood. Several others de-nailed the aluminum roofing sheets and folded them so they would fit into the horse pack boxes. The old cache area was cleaned up including large tarps, gas cans, a winter horse blanket, cooking pots, paper plates, a lantern, ripped top garbage bags, aluminum cans uncovered, full food cans, and wire and nails pulled from trees. This was completed in one hour with the six of us.  All of this was weighed and balanced into horse pack boxes and canvas bags. 275 pounds of garbage came out back to our base camp at Memory Lake. 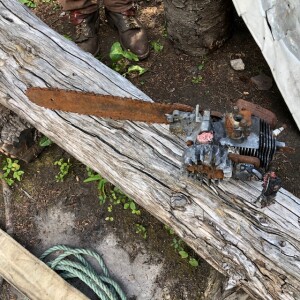 Day 2 – Old rusty chain saw, one of the many pieces of junk removed 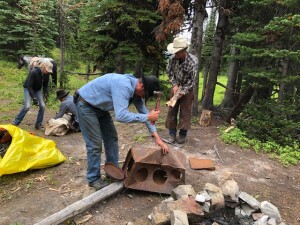 Day 2 – Dismantling and cleaning out the old junk 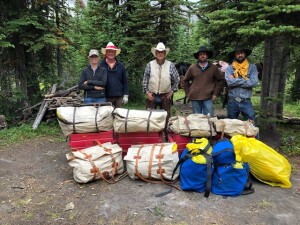 Day 2 – Junk all packed up and ready for loading onto the packhorses, 275 lbs of it! 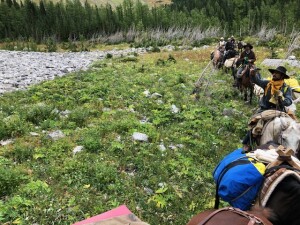 On the third and final day, with the limited horse power from Memory Lake to horse pack back out, due to everyone’s camp gear needing to go back to the vehicles on everyone’s personal packhorse, only 40 pounds of garbage came out to the valley where the vehicles were, on the only extra packhorse. The sick horse was OK to travel out the last day and finally drank some water. 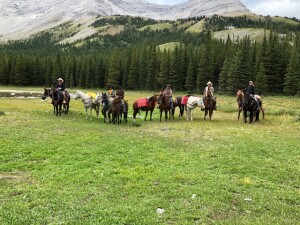 Day 3 – Group shot, horse packers on their main horses, with their pack horses

I had already talked to both Alberta Parks and SRD/Forestry as to what our mission was, and they both wanted to help by bringing the rest of the garbage out with either a quad/side by side, or fly it out. It sounds possible that it will happen in the next 2 weeks (as I write this in early September). I encouraged them to do it ASAP as there was a large grizzly in the area and he/she may rip into the bags and make a mess. (There were the old food cans we chopped open to empty and they had a smell about them!)

All I could find out so far about that old outfitters camp was it belonged to Leverne Blocks of the CNP. He hunted/guided for many years out of there and killed a lot of sheep. The #2 ram came out of Oster Creek, but not sure what year that was, or who the guide or resident was. Perhaps it was one of Bert Riggall’s ‘Three Musketeers‘!?  My neighbour said he also used that camp to hunt out of it for game. Pretty sure no one hunts like that anymore in that area with horses. I will keep asking around. Leverne Blocks was killed when he went to light his smoker at home, when it blew up.

The next mission is to find out how much horse camp garbage is at the Hidden Creek GDT campground and go in and clean it up.

If you have any info about these old outfitters/hunting camps or have a copy of the ‘Three Musketeers‘, I would love to hear from you. My email address is wendydav@shaw.ca  I saw the written story by Bert Riggall at the Whyte Museum, but did not have a copy made. I still could. I checked online with the Willow Valley Trophy Club to see if they had a copy but did not find it. Perhaps someone will know of the story or more on the Beehive area old outfitters camps and hunting. Unfortunately all the old timers are gone!