This was not supposed to be a swim adventure. It was supposed to be a lovely five day loop on the GDT and one of its scenic alternates. The plan was to hike south from Maligne Lake, up the Maligne River Valley to Maligne Pass on the GDT, and then take the high route – the 6 Passes Alternate back to Maligne Lake. All on uncrowded “trail” and in an exquisitely beautiful area. Starting out, yesterday had been a “bluebird” sky day, and the sun was out again.

The Maligne River Valley has a reputation of being challenging – bugs, solitude, overgrown, disappearing trail, and the Maligne River crossing. But I had done my homework, reading what I could find on the crossing, etc., had the GPX track loaded on my phone, had done well crossing the Smoky River last year, and was looking forward to the challenge and seeing this beautiful area.

From Maligne Lake, good trail started out through beautiful forest. And there was not another soul to be seen. But there was wildlife. Some animal, maybe a marten crossed the trail ahead and went up a tree, too big to be a squirrel, too small to be a bear, black, long bushy tail…. 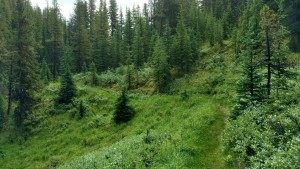 It then clouded up and the rain began, on and off at first. Still good trail, including a bridged creek right before Trapper Creek campground. 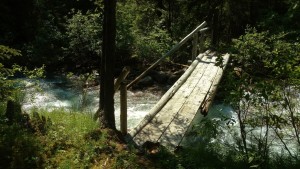 Some creeks are bridged

Although this trail and its camps get little to no maintenance, Trapper Creek campground was in good shape, good bear hang, picnic table, and so forth. A substantial creek about 3 km south of Trapper Creek was flowing fast but only shin deep, So crossing went smoothly, but it took some looking to find the trail after crossing. The forest began to open up into beautiful meadows and blue skies came back with distant mountain views. It was just gorgeous back here. Sure the trail was overgrown, but it was there and not hard to follow. Hey, this trail didn’t seem nearly as bad as its reputation…..

Then it clouded up and started raining with no let up. Still beautiful countryside. The Maligne River came into view and a short ways later the trail reached the river where the old bridge used to be. A part of it was still there, but definitely only as a landmark, not at all useful for crossing. 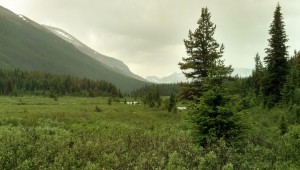 Well, the Maligne River was flowing fast and high. Nothing like what the blogs or trail descriptions portrayed, that had said to expect maybe knee deep or even lower at this time of the year. But this year had set records for rain, supposedly the most since 1923 or something. Even the Maligne Lake/Medicine Lake outlet channel that had been dry for years, was flowing high this summer. On top of all that, this was mid-July; July 23, 2019 to be exact, when water levels are still relatively high due to snow melt. My inadequate homework and judgement was beginning to show. This could be a “show stopper”…. However with utmost focus and patience, I was able to successfully cross:

And then it was over, I was across, on the trail on the south side of the Maligne River. Wow!

Thinking this shouldn’t be too bad, should get to Mary Schaffer trail camp late, but still with plenty of light, off I went down the trail….. Until there was no trail, no trail evidence at all, no ruts, no corridor, definitely no flagging or blazes, not even old style blazes, nothing. The GPX track showed the route followed the Maligne River. And so the bushwhacking began. And it was slow. About 2 km before Mary Schaffer trail camp, with the sun dropping, I had to stop for the night. This was getting worrisome – supposedly there was about 6 – 8km more of this bushwhacking, and my abysmally slow rate through it meant an extra day was needed. But I didn’t have an extra day of food, and hitting some of the alternate’s passes, especially the one with a short scramble, without enough fuel in me could be bad. Well what a night it was, thunder and lightning, and pouring rain on and off all night. Unable to sleep, deliberating about the situation, I finally decided, it was best to turn around and go back, that was a known quantity, although I really wasn’t looking forward to re-crossing the Maligne River. But since I had done it, I should be able to do it again… not thinking about what all this rain was going to do to the Maligne River. Very bad judgement here with this decision, but I didn’t understand that at the time.

Morning came, July 24, packed up, began the bushwhacking back to the Maligne River crossing. It was still raining. Came upon a giant female moose very close. What a treat! Giving her plenty of room, continued on and came to the river crossing before noon. Optimistically, thought this would work out OK. Until, I saw the river. It was at least a foot higher, brown muddy swirling water, and couldn’t see the bottom anywhere. I knew where to cross, and so doing it as I had successfully done it the day before, I went for it. Very bad judgement! This time it got deeper and deeper, past high thigh, crotch high, then waist high, with about 6 more feet until it looked better. Waist high was no good – too much of me in the water for the river to push against and not being able to find a next foot plant, I lost it, and the river swept me away. It was BAD! Banged against rocks. The current took me in the deep channel up against the island. Went under, and thought I was a goner. It crossed my mind, this is how people die… Then saw willow branches sticking out from the island above me and grabbed for them. Pulled my head above water for sure, but couldn’t climb out there, too deep, the bank was too steep, and the current was too strong to be able to stand. So hanging onto the willows, branch after branch eased down to the end of the island. And there in the shadow of the current was a low gravel bar that I pulled myself onto – ALIVE! So thankful just to be alive.

But my hiking poles were gone, so no way I would be able to cross even if the water dropped a foot to what I had crossed the day before. And it was still raining so it could go higher before dropping.

Fast forward…, with some wonderful help, I got back to Jasper. No broken bones, lots of black and blue marks, some scrapes, and pulled but not torn ligaments/tendons/whatever the things that hold knees together are, and important lessons learned the hard way. Among them, how not to cross a river: