Oh The Peaks You Will See: Crowsnest Mountain 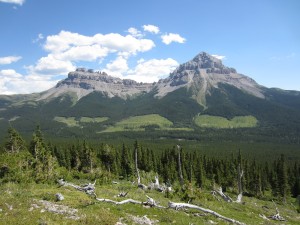 When I asked some intrepid GDTA thru-hikers what mountain should be next in this series a resounding answer was Crowsnest Mountain. But it is not just the purview of those who hike this trail, but also lucky travellers along Highway 3 in Crowsnest Pass may gaze at its grand beauty. Specifically it lies in the Canadian Rockies in the Crowsnest River Valley between Allison Creek Valley and McGillivary Creek Valley at Latitude 49°42’20” Longitude 114°34’20” in the Municipal District of Ranchland #66, Alberta, and is found on Topo map 82G/10.

In Section 7 (Coleman to Alexander Creek) of Dustin Lynx’s Hiking the Great Divide Trail you will find much of the GDT on motorized trails and gravel roads. Ideally the route would lie nearer the Divide. But to quote Dustin Lynx, “the castellated peaks of Seven Sisters and Crowsnest Mountain are your ever present companions” giving a bit of interest to a rather uninteresting walk.

According to Place Names of the Canadian Alps, George Dawson, in his Geological Survey of Canada 1883-1884 noted that the Crowsnest mountain, pass, and river where originally named by the First Nations because of the big black birds which nested in the area. The Cree may have been referring to the ever present Common Raven, Corvus corax.

There is an interesting story about the first ascent in 1904. None other than Edward Whymper, British mountaineer who did the first ascent of The Matterhorn, was interested in bagging Crowsnest peak, a mountain claimed to be ‘impossible of ascent.’ In July of 1904 he travelled to the vicinity, hired Swiss guides and sent them out to check out the route—but these men could not resist! They summited, leaving a flag, and telegraphed Whymper at his camp in Lake Louise for further orders. Whymper was not happy his employees had stolen his distinction of first ascent. Alan Kane’s Scrambles in the Canadian Rockies confirms the “tourist route” used today is much easier and was first ascended in 1915 as a solo trip.

Crowsnest Mountain has also been called the ‘upside down mountain’ with poems written to this unique feature. It is not upside down; however, the rock at the top is older than the rock at the bottom. The upper cliffs are limestone of Paleozoic age, while lower are younger Mesozoic rock. A sheet of rock from the High Rock Range to the west, was pushed upwards and eastward riding over the younger rock. Over the eons streams have cut away the sides of Crowsnest Mountain and left the peak isolated, a beautiful island of old rocks sitting on younger rocks, a geologic, and very beautiful feature, called a ‘klippe,’ German for cliff or crag. All in all, a mountain to be revered from the Great Divide.