After an amazing signature trail maintenance trip on the Aldridge Creek Trail in BC, five keen volunteers continued the trail maintenance spree on the Alberta side of the Divide from July 22-25. The small, but enthusiastic crew hiked for four days from Owen Creek Canyon to Pinto Lake and out over Sunset Pass, clearing trail that had seen recent fire, wind and flood damage and adding blazes and cairns to guide hikers through the wilderness. Covering a distance of about 40 kilometres on the Great Divide Trail, the trail crew hiked over four high alpine passes, along cascading creeks and next to classic Rocky Mountain rock walls, while they performed significant maintenance on about half of this section of trail along the way. 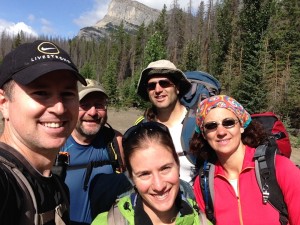 Our first day began with a thunderstorm wake-up call but fortunately the rain subsided by the time we were gearing up for the day. We began our work with a gradual climb alongside Owen Creek Canyon, clearing 6 km of trail from built up wind and deadfall from a previous wildfire in the area. 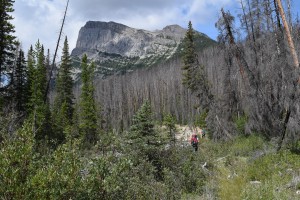 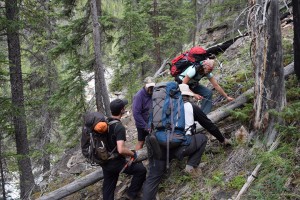 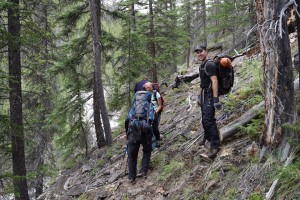 After a full day’s work the crew decided to put the saws and loppers away and hike to camp below the first of three passes ahead of us. After blazing a confusing junction at kilometre 6 (future hikers: go left at the junction and hug the creek!) we discovered the upper section of Owen Creek trail had been badly washed out. With a bit of rock hopping and scrambling alongside the creek we settled in an elusive alpine meadow camp with beautiful views. 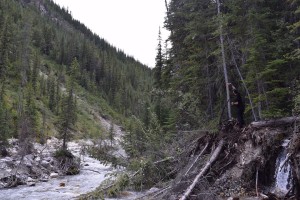 Blazing the trail in the Owen Creek Canyon 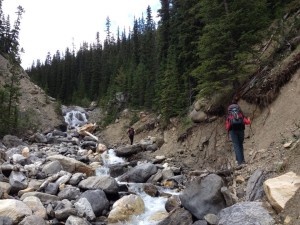 Our second day was focused on hiking through the alpine where there is no trail to maintain. We made it over the first pass (2460 m) and down the other side to have lunch at the spectacular upper Michele Lake. 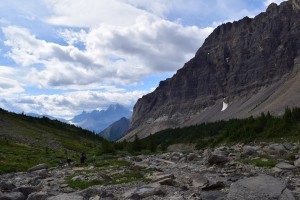 Michele Lakes, along with several other alpine lakes on the Great Divide Trail, happen to be some of last remaining refuges for the Golden Trout. The fish is a native of the Sierra Nevada mountains in California and was introduced into the alpine lakes along the GDT. Now that it has been fished out down south, it makes our northern lakes all the more precious. 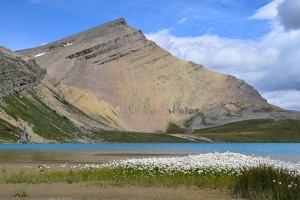 After lunch we made the trek over the second pass of the day to the highest point on the Great Divide Trail at 2590 metres! 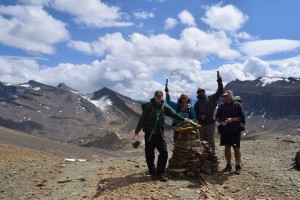 There are a few cairns placed on this section to guide hikers and the route-finding is fairly straight forward. After running down the other side, we made camp at Waterfalls Creek. As we hung out by the fire in the former outfitters camp, we were treated to rainbow views as rain showers and sunshine took turns passing over us. 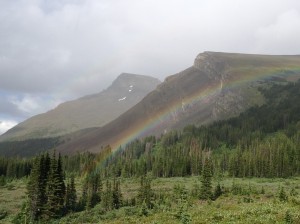 Our third day was a bit grey, but still saw us hiking through magical wilderness. We marked the crossing of Waterfalls Creek where the established trail continues and cleared the trail up until it fades away above the treeline. 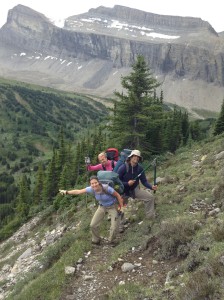 After a morning of clearing trail in the subalpine, we broke through to alpine hiking over the third pass (2460 m) under the watchful eyes of two Rocky Mountain Bighorn Sheep. After scurrying down the other side for lunch, the rain settled in as we headed towards Pinto Lake. 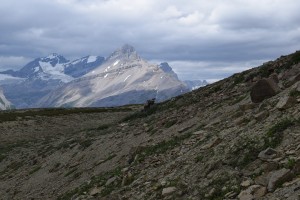 Under the watchful eyes of Bighorn Sheep

The rain continued all afternoon as the crew cleared deadfall and brush on seven kilometres of trail until they were soaked to the bone. The rain let up as we made it to the established campground at Pinto Lake and we spent the evening discussing with pride all we had accomplished over the past three days around a cozy campfire. 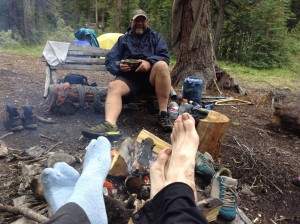 On day 4, we strapped on our packs for a final day of hiking out over Sunset Pass into Banff National Park. It was a lovely bit of trail up graded switchbacks over the pass. On the other side, we contended with overgrown willows, but barely noticed as we were struck by the mountains surrounding us. After a few more switchbacks down to the trailhead and a bit of car swapping, we said our good byes and headed back to civilization. 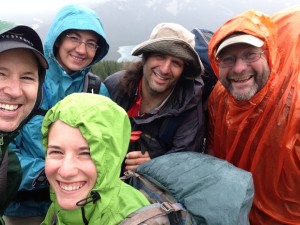 The GDTA Trail Crew on Sunset Pass, still happy after days of rain, clearing and mountains

It was a productive trail maintenance trip with many scenic rewards to keep us motivated. Our three days from Owen Creek to Pinto Lake is typically completed by thru-hikers in a single day and we hope our efforts made it a little bit smoother for future hikers straddling the Great Divide. Happy trails!