Tales from the Great Divide

Its History, Its Founders, Its First Hilarious Book

Like Canada’s early pioneers, Jenny Feick (rhymes with hike) and her colleagues (Mary Jane Cox, Chris Hart, Dave Higgins, Cliff White, and Dave Zevick) identified, described and mapped potential routes for the 1,200-km trail along the continental divide in the summer of 1974. They did this work long before the days of Google Earth, GPS, the internet, cellphones, satellite phones, drones, or lightweight backpacking gear.

Funded by then Prime Minister Pierre Trudeau’s Opportunities for Youth employment program, armed with clipboards, pencils and topographic maps, they became surveyors and cartographers in their own right.They made good on an idea first proposed by the Girl Guides of Canada in 1966 and advanced to Parks Canada by Jim Thorsell in 1970 after his extensive trail surveys in 1968-69: Build a trail along, across and adjacent to the border of Alberta and British Columbia. 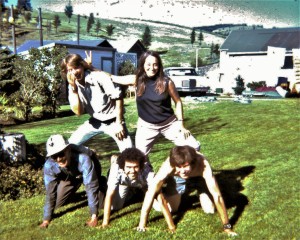 Some of the Project: Great Divide Trails crew at their base of operations in the Kinnears’ back yard in Coleman, Alta. in June 1974 – (top) Cliff White, Mary Jane Cox (now Kreisel), (bottom) host Bill Kinnear, Dave Zevick and Dave Higgins, Coleman, Alta., summer of 1974. (Photo by Nettie Kinnear)

After the project, Feick, Higgins and Cox interested others in this grand idea, including Lani Smith and Jeff Gruttz.  All five are still involved with the GDTA today.  By April 1976, they founded the Great Divide Trail Association with Brian Prior as first President.  Smith, Gruttz and others began to establish the Great Divide Trail that summer, despite 32 consecutive days of pouring rain. 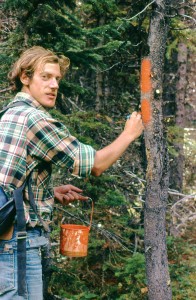 Lani Smith painting a double blaze on the GDT in 1979. (Photo by Dave Higgins)

Fast-forward to “Tales of the Great Divide”

Edited by Dr. Jenny Feick, now retired from her 36-year career with Parks Canada and the BC Ministry of Environment, “Tales from the Great Divide” contains humorous stories and anecdotes from the early days of the trail. It’s also an emotional account of the various trying and daring exploits or “misadventures”, as Dave Higgins notes in Chapter 3. 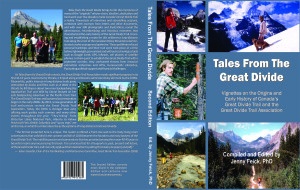 Cover of the Second Edition of “Tales from the Great Divide”, published in June 2020.

The ‘Misadventure’ of the Broken Volkswagen

In one misadventure described in the book, a tree skewered the Project: Great Divide Trails crew’s 1962 Volkswagen. Chris Hart had kindly loaned the blue notchback sedan he bought for $75 to Higgins and Feick for their week of trail survey work.

“To us, it was a treasure,” notes Feick, “because the way they built Volkswagens back then, they could go anywhere. This car could go places a four-wheel drive pickup couldn’t go.”

The story goes that Higgins and Feick drove down a steep hill on an abandoned mining road and parked in the wilderness. Later, after completing their day’s trail survey work, when they drove up the road, a dead, leaning lodgepole pine dented the roof of the sedan and then broke through the top of the windshield, spraying glass everywhere and ‘shish-ka-bobbing’ the car!.

“(The pine) went right across my shoulder and ripped my jacket,” explains Higgins in the story. “We instinctively ducked.”

After ascertaining that they were both unscathed and extricating the car from the tree, they had to drive back to their base in the Crownest Pass without a windshield. When it began to rain, they turned on the windshield wipers so it looked to onlookers as if they still had a windshield. Dave remembers that whoever sat in the front passenger seat could stand up through the windshield and wave at the other traffic. “It was a lot of fun,” he notes. 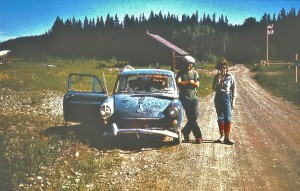 Jenny Feick and Chris Hart with ‘Old Blue” the infamous VW from Project: Great Divide Trails (after the windshield was replaced), at the US/Canada border in the Flathead Valley, BC, July 1974. (Photo by Dave Higgins)

As you read “Tales from the Great Divide”, you discover that every one of the Project: Great Divide Trails crew members faced a life-threatening experience during the course of their trail survey work during the summer of 1974. Cliff White, the project’s leader in 1974, describes how he unexpectedly emerged from a forested trail into an overburden pile just as a giant mining truck began dumping its next load of massive rocks. “Making Molehills of Mountains” tells his sad and scary story of the Erickson Creek Valley in BC.

The History of the Great Divide Trail 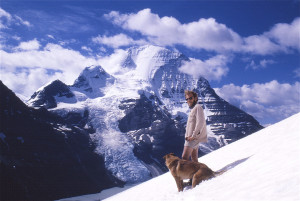 Jim Thorsell and “Dawg” at Mount Robson Provincial Park, BC in 1970. (Photo by Mike Misko)

The 1960s to mid-1980s looked like a promising time for the GDTA trail crews and the trail they surveyed. Dr. Jim Thorsell, the pioneer of the concept in the mountain parks, no doubt understood the GDT’s great future when he penned a provisional trail guide in 1970. In 1971, Brian Patton and Bart Robinson included Thorsell’s provisional trail guide in the first of several editions of their widely used “Canadian Rockies Trail Guide”. From 1976 to 1988, GDTA volunteers in organized work parties, supported with funding from the Alberta government, cleared and maintained over 110-km of the GDT and associated access trails on the Eastern Slopes between Banff and Waterton Lakes national parks. Higgins maintained his dedicated involvement in establishing and mapping the GDT throughout this time. Gillean Daffern included descriptions and maps of the GDT in her Kananaskis trail guides, and Gem Trek Maps put the GDT on their maps.

Everything changed in the mid-1980s. By 1987/88, GDTA volunteers became discouraged by the changes in government policies favouring resource extraction and motorized recreation over watershed protection and non-motorized outdoor recreation in the headwater areas along the Great Divide. Logging companies made clearcuts over the GDT, or just left a narrow strip of trees along the trail that fell over during the first major windstorm. The Line Creek Mine in the Elk Valley of southeast BC annihilated the series of historic trails, wagon roads and routes selected in 1974 as an ideal means to get from North Fork Pass south to Highway #3 in the Crowsnest Pass. The GDTA Board decided to put the organization into a state of administrative dormancy. Higgins, Feick and others continued with informal trail maintenance.

Meanwhile, people began rediscovering and backpacking the GDT. After losing their way along an unmaintained segment of trail in 2003, Dan Wallace and Wayne Marshall, who worked at SAIT in Calgary, decided the GDT needed TLC, and so formed the Friends of the GDT. 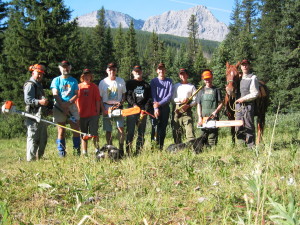 In 2000, Dustin Lynx released his first guidebook “Hiking Canada’s Great Divide Trail”. Although volunteer-built sections of the trail were missing in the guide’s first edition, the third edition, published in 2018, pieces together the six major routes that form the continuous trail and notes its official length by GPS as nearly 1200-km. One also learns about the Great Divide Trail Association, and how settlers and Indigenous groups once traveled the trail while hunting and trading.

In 2012, the Friends of the Great Divide Trail met to discuss how best to continue trail maintenance, and to begin approaching government for formal protection of the Trail. Although maintenance had been quite successful, the informal nature of the volunteer group made obtaining the necessary permits increasingly difficult. A decision was made to charter a new organization dedicated to the Trail. In the course of investigating a new charter, the group learned that the Great Divide Trail Association was dormant but not extinguished. They were able to file Articles of Continuance and resurrect the GDTA by 2013. Brad Vaillancourt of Vancouver BC, who thru-hiked the GDT in 2006, served as first President.

At a talk she gave in mid-May 2020 via Zoom teleconference to the Alpine Club of Canada in Victoria, BC, Feick remarked “The new GDTA brings together the pioneering work of Jim Thorsell in the mountain parks, with the work of Project: Great Divide Trails, and the first iteration of the GDTA, to create a 1200-km route that to thru-hikers across the world has become the epitome of long-distance hiking trails. They have become a vibrant, professional, health & safety conscious, and tech savvy not-for profit charitable organization… I’m very pleased to see so many others who still share this dream over 45 years after we did Project: Great Divide Trails. I applaud the Great Divide Trail Association’s efforts to continue to build and maintain the Great Divide Trail and a protected corridor.”

How You Can Relive the GDT’s History

On September 30, 2019 in Calgary, Feick launched the first edition of “Tales from the Great Divide” at the GDTA’s AGM. By mid-November, all 30 copies of the so-called Collector’s Edition sold. Since then, Feick has been working to complete a second edition, which corrects errors found in the first edition, and that contains new material, other improvements and refinements. People interested in purchasing a pdf of the second edition should contain her at jenny.feick@gmail.com, or check on Amazon’s Kindle Direct service this summer to get a print on demand copy. The University of Calgary’s Archives and Special Collections contains a copy of the Collector’s Edition of “Tales from the Great Divide” within the GDTA fonds. Anyone interested in viewing it can contact the archivists at archives@ucalgary.ca to set up an appointment. As you read it, imagine you’re around a campfire hearing stories of pathfinding and trail work in an era before GPS and lightweight gear, as the GDT “originals” share their memories. 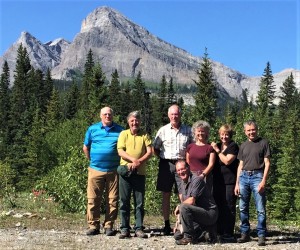