The Little VW That Could

or “How We Skewered a Volkswagen”

All the recent brouhaha surrounding Volkswagens rigged to pass emissions testing brings to mind the time we had our own jury-rigged VW, which is a much happier story as it was instrumental in helping us survey the original route of the Great Divide Trail.

In the lead up to our 3-month-long trail study project in 1974 (which resulted in a final GDT routing plan between Waterton and the Kananaskis area), my five colleagues (Mary-Jane Cox, Jenny Feick, Chris Hart, Cliff White, and Dave Zevick) and I found ourselves short one suitable vehicle for transport to and from the various study areas along both sides of the continental divide. By “suitable” I mean something capable of traversing hundreds of kilometers of rough backroads, fording rushing creeks, and carrying up to four people plus backpacking gear. But I also mean something that could be had for no more than $100, which, of course, would immediately exclude anything reliable enough to do the job. Good thing we were all too young and naïve to realize that! 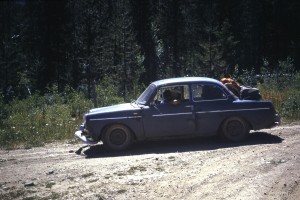 As luck would have it, Chris located and purchased what seemed like the ideal candidate: a sky-blue 1962 VW “notchback” sedan. A bit on the small side, maybe, but it had a killer feature: you could put packs in both the front AND rear trunks, or under both the bonnet and the boot if you happen to be English (the location of the engine wasn’t entirely obvious, at first). Chris also scrounged the most user-friendly maintenance manual I’ve ever seen, appropriately titled “How to Keep Your Volkswagen Alive, for the Compleat Idiot” – a thick tome filled with hand-drawn illustrations, earthy advice on love and the proper use of torque wrenches, and the admonition to “Be kind to your ass, for it bears you.” 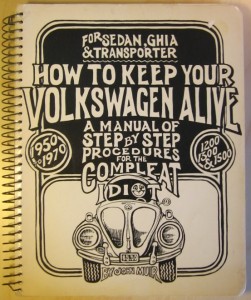 A bit rusty here, there and everywhere, our new acquisition wasn’t in terrible shape – well, not after we patched a gaping hole in the floor with a piece of plywood. At least the engine ran, and the brakes and lights seemed to work, most of the time. Shifting the worn-out gearbox, however, required a new skill: “double-clutching,” a complex sequence of clutch-and-accelerator applications. But the good news? Chris underspent the budget by half!

Confidence built when “Blue,” as Chris dubbed the car, made the trip from Calgary to Crowsnest Pass without trouble. Week One of the project found Jenny and me surveying the area just north of the Pass. We’d dropped off Chris and Dave in their assigned area a few days before, Chris warning me to take good care of Blue. We were descending the switchbacks of the old Vicary Mine access road, yours truly at the wheel. I didn’t think anything of it when Blue brushed the underside of a dead lodgepole pine overhanging the road in the same direction as our travel, and later that day we headed back up the steep road, in second gear with the engine roaring in complaint at the effort. Rounding a bend, I spotted the overhanging pine and, remembering how we’d slid neatly under it, kept going, pedal to the plywood. Not smart. The tree must have settled a bit lower from our previous passage, because this time the brittle tip caught on the windshield molding and broke right through with an enormous crash and spray of shattered glass and branch fragments!

When at last all was still, I glanced past the tree trunk in the direction of my partner, half-expecting the worst, and was relieved to see her staring back at me, albeit with an expression of pure shock on her face. “I didn’t want to look,” she exclaimed. “I thought your head would be missing!”

I almost replied no, I’d already lost it before we even got near the tree. But we’d been spared, this time at least. We quickly exited to survey the damage, shards of glass and piles of sticks and bark falling from our laps. It was NOT a pretty sight!

The long straight tree trunk had gone right through Blue! Or, more accurately, I had managed to skewer the car like a big chunk of beef bound for the grill. The top 2 metres of tree trunk protruded from the rear passenger side wheel well, right above the tire. What a sight! “I must’ve kept the gas on,” I explained, rather lamely. “I’m sorry!”

“Well, I’m just glad we’re both alive,” Jenny said with relief in her voice, “but Chris might want to kill you for wrecking his pride and joy!”

“Doesn’t look THAT bad,” I lied. “Maybe we can back it off the tree.” Fat chance, I thought, but worth a try anyway. So I got back in, and when Blue’s engine started right up I took it as a good sign. It was a bit more than the usual three minutes finding reverse, but then the car slowly extracted itself, assisted by gravity on the steep hill. Then it was just a matter of removing the remaining windshield fragments and cleaning up the mess, then driving to the meeting point to pick up Chris and Dave.

Jenny was right – Chris DID want to kill me. But I promised to buy a new windshield, and we amused ourselves on the way back down the Forestry Trunk Road to Crowsnest Pass by standing and waving at all the passing vehicles through the new opening, the person in the passenger side rear given the job of holding a towel over the other new opening to keep the dust to a minimum. In the Pass, however, it was raining so we turned on the wipers to (hopefully) avoid attracting the attention of passing RCMP cruisers, certain that if we were ever pulled over our precious car would be impounded as a hazard to other motorists. 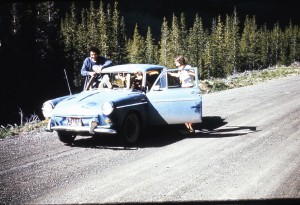 Look Ma – no windshield! (On the way back to Coleman after the skewering)

That was only the start of the fun. The following week Blue’s generator had a meltdown (literally). At the local wrecking yard we found a dead Beetle and bought the generator. One small concern: it had a shaft sticking out of both ends, whereas Blue’s only stuck out one end. No huge problem – we took a hacksaw and cut the un-needed end off. But when we got it all installed and hooked up, the dashboard generator light still wouldn’t go out. It was then we noticed the direction arrow stamped on the generator housing – facing opposite to the way it was actually rotating. “Think we cut the wrong end off, Dave?” Chris snickered, and Jenny added, “Maybe you should’ve read the manual.” Good points, both, but luckily I’d made one of those electromagnets with a battery, wire and a nail in elementary school, and remembered that reversing the wires also reversed the magnet’s polarity, so with fingers crossed we took the generator apart and swapped the two large wires inside. Presto – back on the road again!

A week or two later the clutch cable snapped just as we pulled onto Highway 3, a couple of miles west of Fernie. We pushed the car the rest of the way into town, to the only garage that was open, only to have the mechanic tell us it would be at least a week before he could get a new cable, adding insult to injury by declaring, “Next time don’t buy a foreign car!” As the saying goes, necessity is the mother of invention – so we spliced in a piece of electrical wire, Western Union style, and went on our way.

By the end of July the rough roads had taken their toll on Blue’s already worn-out suspension, and both front wheels were constantly going into fits of violent shuddering. Bill Kinnear, at whose Coleman property our group was based, had one of his shop staff at Crowsnest Collieries weld something behind the front wheels, and that solved the shuddering problem – even if the car handled like a go-kart from that point on.

The one thing we could have put to very good use is duct tape, but in 1974 Red Green was still a couple of decades in the future. Instead we employed anything at hand, like boot laces and bungee cords, to keep Blue’s various bits and pieces from separating and disappearing for good. Still, by the middle of August the car was missing a headlight, a mirror, the front bumper, all four hubcaps, and who knows how many random nuts and bolts. 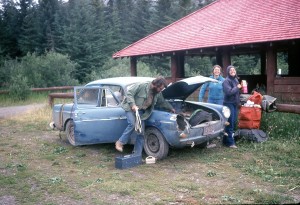 A little worse for wear!

Blue’s final mission at summer’s end was the inevitable trip to the junkyard in Calgary, but sadly it came up a bit short – a mile or so west of the city limits, a front wheel broke clean off and rolled into the ditch. The car had to finish its trip in humiliating fashion at the rear of a tow truck.

But Blue had nothing to be ashamed of – the plucky little VW had done everything we asked of it, like climbing to fire lookouts, crossing mountain passes, and fording dozens of creeks and rivers, often with water halfway up the doors. And with its rear-mounted engine, it had great traction in the mud. I can’t count how many times we drove right past stuck 4×4’s, huge smiles on our faces. Blue truly was an indispensable member of our survey team. 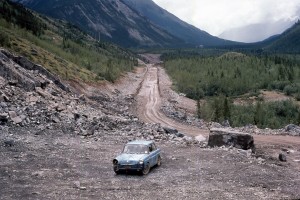 Blue near the Kananaskis Highway construction

Needless to say, I personally developed a real soft spot for Volkswagens and went on to own several over the succeeding years – although never again did I manage to run a tree through one! And I suppose time will tell if Volkswagen (the company) survives its own self-inflicted skewering as well as Blue did.