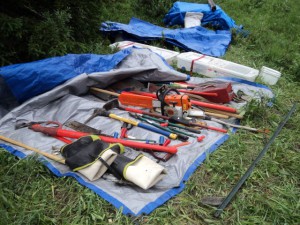 Tools of the Trail Trade

This work was originally planned for 2011, but logistic issues required it to be postponed. This year, everything went smoothly and despite the occasionally threatening – and downright soggy – weather, the planning goals were met.

The ford of Etherington creek is only about three steps, but the channel is deep.  One of the first tasks was to reinstall a bridge, replacing one that was swept away in the floods of ’95. 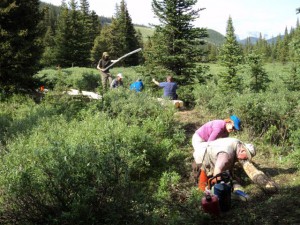 The bridge is located a bit further downstream from the original location, and is adjacent to the spot where the Trail exits the trees and enters the meadow bottom lands.  The trail has also been rerouted on the north side of the meadows, so it no longer goes between the two hunters camps as it did in the past.

In the cut-block section, which has caused many people problems over the past years, a full day of chainsaw and Pulaski work has cleared the deadfall off the old trail in the upper block, and laid down a new path tread in the lower one.  With this work, plus clearing all the way up to Lunch Stop Meadow, we hope some outfitters will start using this section of trail again, and help really establish it. 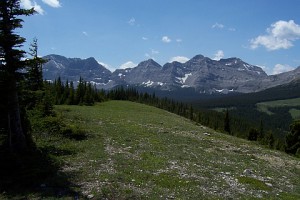 On Rye Ridge, looking southwest to the Divide

In the other direction, a team went up Rye Ridge and picked up the re-blazing from where work stopped several years ago.  The ridge is now blazed north to where the Trail re-enters the trees.  A navigation issue (or two) were also addressed by brush clearing.

And perhaps most importantly, we installed our first GDTA sign post.  It’s only taken about 35 years, and we hope this is a big step toward formal recognition of the GDT through the Forest Reserve.

Thank you to Mountain Equipment Co-op and Stihl for providing funding and support for the work.