As you may already know the GDTA is a volunteer based organization that relies on the work and passion of people like you. Every year we recognize the efforts of volunteers who go above and beyond to help us achieve our objectives. 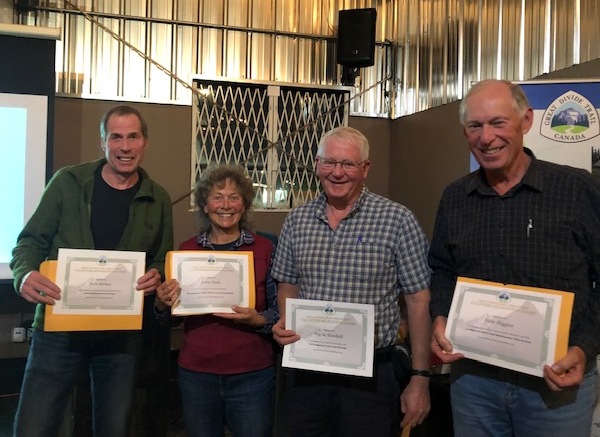 Alistair Des Moulins – For representing the GDTA at in the meeting of Livingstone and Porcupine Hills Recreation Advisory Group with Minister of Environment, Jason Nixon.

Jenny Feick – One of the Original GDT’ers, we would like to recognize Jenny’s dedication to compiling and documenting the history of the GDT, in particular leading the production of the “Tales of the Great Divide”.

Dave Higgins – Another Original GDT’er, Dave’s resilience and remarkable commitment to the GDT for so many years is remarkable, leading two important Trail Maintenance trips in 2019 to Lost Creek and the David Thompson Heritage Trail. Dave is a regular contributor to the Pathfinder newsletter and helped Jenny Feick with her travel plans to come to this year’s AGM.

Wayne Marshall – For his important contributions as the GDTA Signature Trip Camp Manager, always making improvements and mentoring new volunteers. Wayne has been a mentor and a teacher to so many GDTA volunteers over the years and deserves to be recognized.

Rogier Gruys – For championing the GDT in Jasper National Park allowing us to make significant progress towards trail maintenance, recognition and signage in a national park.

Darrell Aunger – Primary mover and shaker for organizing a strategic planning session where a wide range of GDTA volunteers were participants. Primary results were creation of a GDTA vison and mission statements, a scan of the GDTA’s strengths, weaknesses and threats as well as establishing a framework for committee structure for engaging more volunteers. Constantly reminding board members to look beyond day to day operations by maintaining a vision for the future towards organizational health and sustainability. Prime proponent for devoting half of each board meeting for refining goals developed at the strategic planning session. Chair of the 2018 board Nominating Committee. Without Darrells’ participation along with others on our Safety Committee in 2018 resulting in compilation of our Safety Manual there’s a high likelihood that we would have lost an entire year’s trail work. The GDTA was the only authorized NFP group to continue trail work on Alberta’s public land. As Darrell expressed “A corporate entity would have taken months to compile what our volunteers accomplished in three weeks.” The safety Committee was spared weeks of wheel spinning through Darrell’s collecting best practices from other area trail volunteer organizations. Created the necessary linkages with STARS air ambulance to handle remote work site medical emergencies. 2018 camp manager along with spouse Julie, trip leading and, most notably, averting a 2018 Signature Trip food disaster by driving from a remote camp to Blairmore to purchase fresh groceries.

Dave Hockey – Dave Hockey has served two terms on the GDTA Board and has been not just leading the GDTA over this time but has been actively involved in just about all aspects of the organization.  He has been a tireless, fearless, passionate supporter of the GDTA.

In 2013, with the support of Brad Vaillancourt and others, Dave led the efforts to re-establishing the GDTA organization – a new Board, new bylaws, new organization.

In 2016, Dave became GDTA President and over the next three years his leadership has led to amazing results:

But it’s not just the big stuff Dave contributed to, he worked day in day out on the GDTA:

Dave Hockey, we just want to say thank you!