2020 was another great year for trail building and maintenance on the Great Divide Trail.  Much thanks has to be given to all those on the GDTA Trail Building and Maintenance Committee (TMBC) who put in an extraordinary amount of work behind the scenes just to be able to safely put together any trips.  Planning was ahead of schedule and most of the planned work trips were full by February.  Then the country went into lockdown to protect citizens from a worldwide pandemic.  It was at this point that all planning was put on hold and work trips were cancelled.  There was a suggestion that all work parties for 2020 should remain cancelled.  The TBMC worked diligently to come up with a plan to safely have at least a few work parties to get a minimal amount of work and maintenance done.  After many hours of planning and strategizing they came up with a plan that would work to enable small groups to at least be able to do a little work on the GDT.  In the end, what these small work groups accomplished was amazing.  All told there were seven planned, advertised trips and two more unadvertised trips.  A total of 57 volunteers participated with many helping out on multiple work crews.

It started in late June when a small unit of three volunteers gathered at Cairnes Creek.  The goal was to put a temporary bridge across Cairnes Creek (the double log crossing that had sufficed for the last four years had broken over the winter), re–scout the first km of the David Thompson Heritage Trail (which still has flooding problems), perform a minor repair, and strengthen the new hand rail on the Lambe Creek bridge. 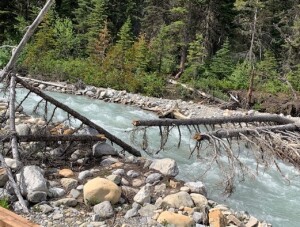 The first day the crew cut the old logs and used some reclaimed lumber to make a stable crossing. 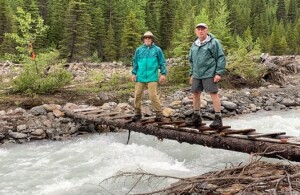 The second day saw the crew make their way eight km up to Lambe Creek to reinforce the handrail on the Lambe Creek bridge.  Along the way they encountered many winter downed trees across the trail which had to be cut out.  They spent a few hours at Lambe Creek performing a small repair to the rail and reinforcing it with the two by fours which they had carried in by hand. 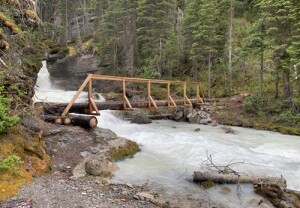 On the walk back the crew took notes of the flooded sections still occurring in the first km for future trips.

The GDTA official trips started June 24 with a volunteer crew of eight plus another crew of eight from the Outdoor Council of Canada.  To safely have this large group, two separate camps had to be set up.  Work on section L of the High Rock Trail (HRT) was started with hopes that at the end of four work crews, 700 meters of new tread would be built.  This was all that had been cleared with chainsaws previously, and without a bird survey the crews could not chainsaw further up the ridge.  Luck would have it that in the Trip #1 crew there was a biologist who would be able to survey the trail all the way to the ridge top.  Now a chainsaw crew was able to further clear the rest of the route.  What Trip #1 crew lacked in experience, they more than made up for with great enthusiasm, and when the smoke cleared they had built an incredible 1.1 km of new trail. 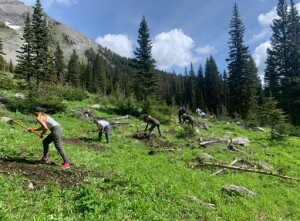 Trip #2 started with wet, miserable weather that would continue the whole five days.  This crew dealt with some of the most consistent wet, muddy conditions ever experienced building the HRT.  As well, they ran into some major endangered Whitebark Pine stands for which tread had to be gently built around.  Trip #2’s tough crew of six built out another incredible 400 meters of new trail. 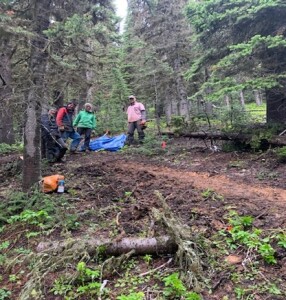 The conditions were not looking too promising for the Trip #3 crew either, as they had to contend with continuing rain for the first day and a half.  Thankfully it soon cleared up and became sunny and pleasant for the remainder of their work party.  The conditions were better but the terrain proved extremely rough with steep sidehill and lots of roots and rocks to contend with.  This very experienced crew built some of the smoothest nicest tread ever, and by the end of their time they had hacked out another 400 meters of new trail. 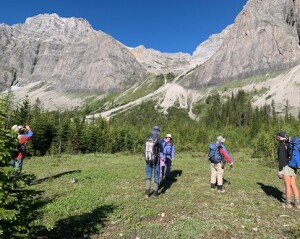 Trips #4, #5, and #6 were the last scheduled ones for the HRT for 2020, and they mostly ran concurrently.  Trip #4 was camped just 1 km off the Atlas Road in section U, and with the help of a crew of Junior Forest Rangers for a day, they were able to finish tread on section U and V, and with the help of the HRT Walking Crew built a set of tricky switchbacks on section W.  As well, they built a bridge over a small creek in section U.  All in all another fantastic 1 km of tread was completed by this amazing mostly rookie crew. 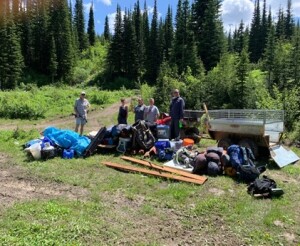 Trip #5’s crew remained camped at the start of section L, and the first day had a really tough 100 meters to complete on a super steep exposed side slope.  This was slow tedious work.  The second day things got a little easier through a fairly flat forest, and then they broke onto Hail Ridge which was easy – mostly just scratching out a route.  Meanwhile a small chainsaw crew had worked down the other side of the ridge into some new regenerated forest.  This was two days of really rough chainsaw and brusher work to get a path worked through these close growing small trees.

During the evening of the third night the Trip #6 Walking Crew wandered into Trip #5’s camp.  The previous three days for them had been spent marking and mapping trail from the southern start at Allison Creek.  Along the way they had built tread, met up and helped Trip #4 crew build switchbacks on section W, and cleared and marked the trail all the way.  This young enthusiastic crew of former GDT thru hikers worked two more days marking and clearing the rest of the High Rock Trail route so that there would be a possibility of making it walkable soon. 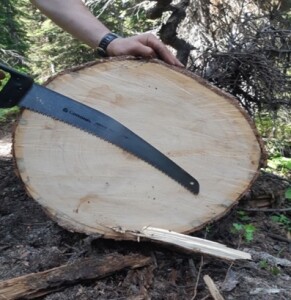 Meanwhile Trip #5 had crossed the ridge, and by utilizing an old horse packers trail, they were making rapid progress to the end of Section J.  The last day saw them work into the regenerated forest area where the forward chainsaw crew was still hacking away.  All in all, this incredible crew had built another 1.2 km of trail.  They did this with the help of an easy ridge and horse packers trail in the middle. 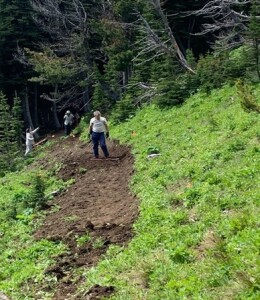 So the High Rock Trips were supposedly done, resulting in an incredible 4 km of new tread built, as well as being completely cleared, marked, and mapped.

Late July saw the largest GDTA contingent of twelve working in two teams at Lost Creek.  Team #1 worked to complete work started last year rebuilding the tread on the Lost Creek Trail.  Team #2 was tasked with building a new bridge over Lost Creek.  The weather cooperated and both teams completed their tasks to extremely high standards. 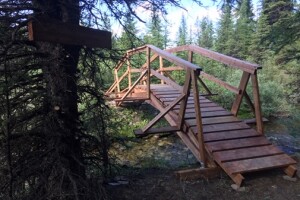 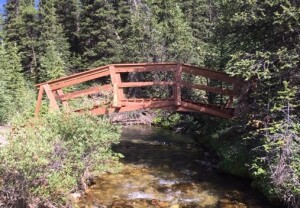 When the Walking Crew’s report came in, it was felt that the entire HRT was “almost Walkable”.  The only really tricky part was a 1 km section at the top of Section E which was deemed too hard to follow.  A decision was made to see if it was possible to get a last minute volunteer crew put together to take care of the impassible kilometer.  The call went out and five veterans and one rookie answered.

The newly made up High Rock crew was designated as Trip #7, and included five fairly experienced trail builders and one rookie.  They worked during the hottest period of the summer.  This enthusiastic crew right away had some decision making as the marked trail was confusing.  Working on some difficult side slope off the bat, they had to contend with stacking some switchbacks where none looked possible.  Slowly, for the first three days they built the new tread.  Each day had a bonus as GDT thru hikers started passing them, showing that the High Rock Trail was being utilized.  The last day was the most difficult terrain as it hadn’t been properly cleared or brushed.  Building good tread on this last bit would normally take a fairly large crew one full trip.  The issue was that this was the critical area that hikers could not follow unless there was some sort of a path.  Digging deep, the five remaining trail builders determined they could at least make something followable and semi-walkable.  What they accomplished was an extraordinary, very walkable path.  Another 1 km of tread had been built and on July 24, the new High Rock Trail officially opened for business! 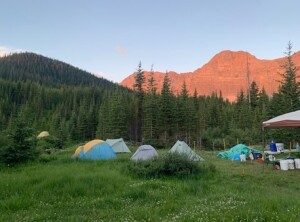 Sunset on the GDTA basecamp

Meanwhile an informal crew of six or so had come together mid July to cobble together another temporary crossing of troublesome Cairnes Creek, so that this year’s hikers might have a safe crossing. 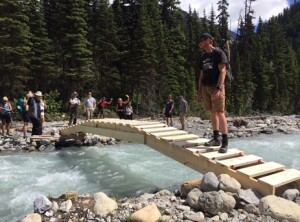 This should have been the end of the story except that there was still work to do so that preparations could be made for work in 2021.  In mid September, a small crew got together again at Cairnes Creek to survey for a new permanent bridge, come up with solutions to mitigate future flooding on the first 1 km of the DTHT, and survey the new possible future route across Amiskwi Ridge and Collie Creek on the east side of the Blaeberry River. 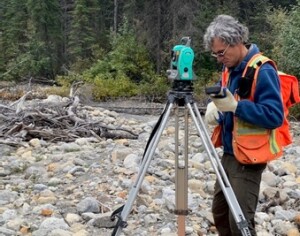 Surveying for a new bridge over Cairnes Creek 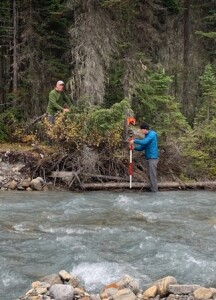 Additionally, scouting has taken place in early October for next year’s work on the HRT sections M, N, and O.  Lots to look forward to!

Thank you to all

Many thanks to all of this year’s trail building crews, as well as the people behind the scenes putting everything together.

Thanks also go out to our sponsors and partners whose generosity has greatly enhanced our trail building and maintenance capabilities – They include Alberta Equestrian Federation, Alberta Environment and Park, BC Rec Sites and Trails, The North Face, MEC, Teck, Stihl, and Columbia Basin Trust.