The new High Rock Trail is open and now the official main route of the GDT. The GPS track has been posted to the GDT App and our map page where it can be downloaded. We continue to improve the High Rock Trail annually, but it is completely hikeable and totally awesome!

Thanks to all of our sponsors, supporters and the incredible volunteers who worked so hard over the past 7 years to build this new trail!

The High Rock Trail is easily reached from the Atlas (Allison Creek) Road. From the Atlas Staging Area (b4), look for the HRT trailhead at the south end of the staging area on the west side of the road. Heading off on the trail, follow switchbacks down to the new Allison Creek bridge. Fill up with water here, as the next reliable source isn’t until Window Mountain Lake in 16 km. Cross the bridge to reach a junction with the Chinook Lake service road. The HRT climbs to the east but for a refreshing swim on a hot day, head west 1 km to Chinook Lake!

Continuing north, the trail crosses Deadman Pass road – the former route of the GDT prior to the construction of the HRT – as it climbs the forested slopes of the Divide. Follow the trail for 800 metres where you will turn right onto an old ATV track. The track gains 100m over 1 km before a short but steep climb over the last 50 metres marks the end of the track and the return to single-track trail at 1740m. 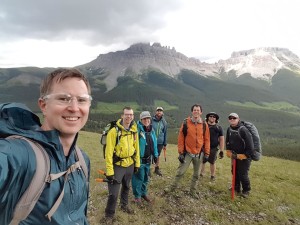 The trail climbs steadily for 600 metres to reach treeline at 1820m. The trail remains above treeline with spectacular views of Crowsnest Mountain to the east, contouring between 1840m and 1920m for the next 3 km.  The trail intersects with an ATV track before dipping back into the forest. In 100 metres, you reach another intersection with the same ATV track and again stay on the trail in the forest, continuing north. The trail stays in the forest for 350 metres before reaching treeline again at the beginning of a short steep climb up a talus slope. The trail climbs 100m over 500 metres, staying just above treeline before the gradient eases off at 2000m. Continue for 1 km, contouring above treeline and up a set of switchbacks through sparse trees to a forested ridge crest. Follow the forested ridgeline for 500 metres to a high point at 2100m (b6) with incredible views of the Crowsnest valley, until the trail veers away from the ridge dropping into the forest. In 100 metres, the trail enters an old cutblock where it will mostly remain for the next few kilometres. There is regrowth in the old cutblock but still many outstanding views of the impressive headwall of the Great Divide.

The trail gently descends through the old cutblock, losing 150m elevation over the next 1.5 km. Cross an ATV track in 1.2 km and in 300 metres reach a second ATV track at the valley bottom at 1940m. Cross this ATV track to follow new trail paralleling the base of the headwall for 1.7 km, including a short steep climb to bring you to the western edge of the cutblock at 2020m. Single-track trail continues through old cutblocks and adjacent forest for 1.6 km until reaching the Window Mountain Lake trailhead and junction with the WML Bypass Trail. Note that horses are not able to access Window Mountain Lake but can take the Bypass Trail to continue north on the HRT. 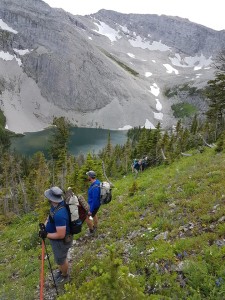 Follow the Window Mountain Lake trail, very steep in sections, for 900 metres to reach Window Mountain Lake campground (b7) on the shores of the beautiful lake. The HRT continues through the campground heading up the sparsely treed slopes on the north end of the lake. The trail climbs well graded switchbacks up to the top of the ridge surrounding the lake, reaching a high point at 2120m in 1 km. On the north side of the ridge, you will see the road descending from Racehorse Pass below you. Follow the edge of the forest where it meets the talus slope on your right, descending steeply to the reach the road in 500 metres at 2060m.

Follow Racehorse Pass Road east for 1 km to a marked junction where the trail leaves the road and begins climbing the open slope. Follow the trail as it climbs steep switchbacks over the next 2.4 km to reach Racehorse Shoulder at 2255m (b8), the highest point on the entire HRT with impressive views in all directions. The trail has an alpine feel as it descends the north side of the ridge at the edge of a lovely larch forest, and in 2.5 km reaches a junction with an ATV road in an alpine basin at 1980m. An emergency shelter is located 3.5 km east down this road. 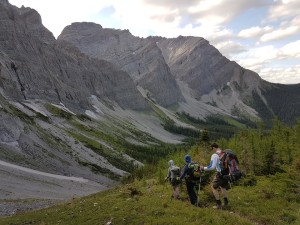 The trail continues for 700 metres across the basin and into the forest before starting a steep climb. Over the next 1.5 km, ascend several switchbacks climbing to the saddle between Hail Ridge and the main divide at 2165m. Descend more gently on the north side of the saddle, 1.3 km down to an old road at 2000m in an old cutblock in the open basin below the huge headwall of the divide. Follow the old road for 800 metres as it curves northward to reach a signed trail junction (b9). First Creek campground is 200 metres off route to the right (northeast). The HRT follows the trail left (northwest), across the First Creek Bridge, for 1.3 km as it ascends along the eastern edge of an old cutblock until the trail enters the forest at 1980m. In another 700 metres of steady climbing, the trail reaches the saddle at 2060m. A rest stop with an excellent viewpoint lies slightly off route, 100 metres west of the saddle. 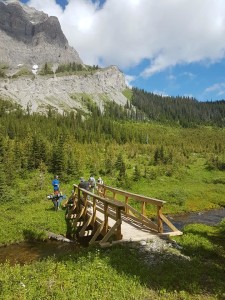 The trail continues northeast, contouring around the east side of Domke Ridge, reaching a high point of 2185m (b10) in 1.3 km. Regain the crest of the ridge and follow it for 1.1 km descending gradually to 2045m at a point where the trail drops sharply off the east side of the ridge into the forest. Descend a series of switchbacks over the next 1.9 km to a junction with an ATV road at 1815m. Follow the ATV road west for 400 metres to a ford of North Racehorse Creek (b11). Good camping exists on a flat bench on the north side of the creek.

Leaving the creek, stay left at a junction and follow the ATV road for 150 metres to where a signed single-track trail leaves the road to enter the forest. Follow the trail as it climbs gradually through thick forest. In 1.3 km cross an ATV track and continue climbing for another 900 metres before levelling out around 1990m. For the next 1.8 km, the trail contours between 1980m and 2020m with good views of Gould Dome and Tornado Mountain to the north. The trail then descends 100m to reach an old ATV track in 750 metres.

Follow the ATV track for 1 km to a junction. Stay left (north) at the junction and descend slightly to cross Fred Bridge. Continue following an ATV road northeast for 2.4 km to a junction with an old logging road at 1715m (b12). Good camping next to Dutch Creek exists 200 metres down the road to the right. The HRT continues left (northwest) following the old road for 4.2 km, climbing gradually through several old cutblocks until it ends at 1910m. The trail briefly turns northeast before it begins following an old seismic line north. In 900 metres, the trail turns sharply east into the forest before descending 60m over 400 metres to reach the Dutch Creek Bridge (b13). Just beyond the bridge, the HRT reconnects with the original GDT as it descends from North Fork Pass.