The Great Divide Trail (GDT) is a wilderness hiking trail in the Canadian Rockies. The GDT closely follows the continental divide between Alberta and British Columbia, crossing the divide no fewer than 30 times. It begins in Waterton Lakes National Park at the Canada-US border (where it connects with the Continental Divide Trail) and ends 1,123 kilometres to the north in Kakwa Provincial Park.

Outside of the Parks, the GDT varies from being a well developed, blazed trail to an unmarked, cross-country wilderness route where navigation skills are required and few or no backcountry facilities exist (e.g. campgrounds, outhouses). Most of the GDT is quite remote and cell phone reception is almost non-existent.

A journey on the GDT promises to be rewarding but not without a few challenges: hiking conditions are often strenuous and potentially hazardous, difficult mountain navigation, glacial stream crossings, deceptively short hiking season, harsh weather including potential summer snowstorms,  grizzly bears, mosquitoes, and remote trail exit points for resupply or potential emergency access. It may sound daunting, but on the GDT you’ll discover a definitive wilderness experience in one of the most magnificent settings on Earth: diverse vegetation, towering snow-capped peaks, iridescent glacial waters, abundant wildlife and panoramic vistas at every turn! 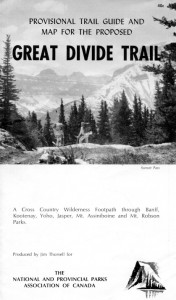 → Learn more about the History of the Great Divide Trail.

Planning a hike on the GDT? Check out a GPS map of the GDT or these other Trip-Planning Resources.

Read Trail Journals of other GDT hikers’ experiences on the trail.

For a visual journey on the GDT, check out our Photo Galleries.