It’s time to start dreaming about epic summer backpacking trips!  And the Northover Ridge should be on your list – it’s on the continental divide (directly on the BC-Alberta border), is easily accessible from Calgary as a short 1,2 or 3 day hike and is spectacular!  It’s not for the faint hearted though – ~33 km loop, more than ~1,500m elevation gain with some exposure and route-finding challenges.  It has it all!  But it’s sooooo worth it.  If you do it clockwise and get to the bit that has some exposure, you can always turn around… you would have the benefit of walking the best part of the ridge twice! 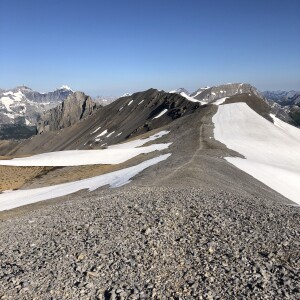 Lynnie, Peter and I did a two-day hike of the Northover on July 23 and 24. The dates are important because the snow was probably the most dangerous part of this trip!  It was late enough in the season that there was no snow on the ridge but getting there required some unique hiking techniques (see photo below).  A few of the slopes had a hard, crusty layer from freeze thaw days.  We wished that we had spikes for two of the slopes.

As we planned to random camp at the tarns that are in BC, we were able to take a game day decision and hike only if the weather looked great.  And we were lucky… clear, blue skies with limited wind, absolutely perfect!

We did the trail as a clockwise loop, starting at the Upper Kananaskis Lake parking lot.  We headed around Upper Kananaskis Lake, then past Hidden Lake and up the valley towards Aster Lake campground. The first part of the trail around Hidden Lake is through some lovely trees and I don’t remember too many route-finding challenges in here, although others have mentioned them in their articles. Beyond Hidden Lake, the hike up the valley is spectacular! 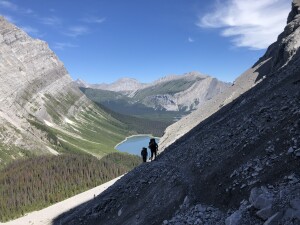 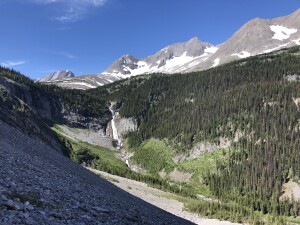 We hit our first bit of tricky snow toward the top of this long climb.  We opted to go down slightly, around the snow as much as possible, hop across the water and then up.  Mighty Lynnie led us up the other side of the stream and then lost her footing and started to slide down.  Luckily, Peter and I were right there and able to grab her ankles, one each, to steady her.  (What you can’t see in the photo below is that the snow continues down the stream, where Lynnie would have gone had she picked up any speed).  A bit shaken up but with her adrenalin flowing, Lynnie used her poles as an ice axe and knelt her way up the slope.  Peter let me go next (thank you Peter!) and I was able to photograph the technique for future hikers! 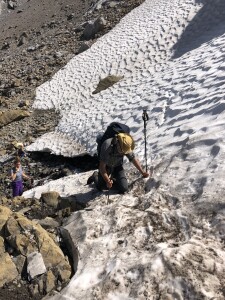 A lot happened in this small area… we met very few people on the entire hike but somehow at this point we met a few gals coming down and a couple going up. Anyways, Lynnie got to the top of the snow, met a couple of young ladies, and immediately said something to the effect of “that was the stupidest thing I’ve ever done.” “Huh” the gals responded, “that was nothing, I dropped my backpack down a small down scramble up ahead and it rolled off the mountain!”.  True story.  In fact, it is such a small world that the gals were friends of a neighbour’s daughter, who when he heard we’d just hiked the Northover, shared the lost backpack story with us.  Apparently, the girls went back to look for the backpack the next weekend, no luck.  It was gone.

We soon came to the small scramble, where the girls lost the backpack, and it was a bit of a surprise.  It’s about 5-6ft straight up with a okay holds.  The girls thought it was harder than the ridge.  When we looked back, the ground did look deceptively flat.

We soon came to Aster Lake campground, walked around the lake and into an open area with many options for the route but no clear trail.    Many folks get discombobulated in here and waste hours hiking to Warrior Mountain (not a bad destination, just not the Northover).  If you take the faint trail on your left in this valley which becomes a pretty well-defined trail, that’s where you’ll end up, Warrior Mountain.  We were also tempted to go right out of this valley (this leads nowhere).  You want to go straight across the valley as best you can; I got out my GPX through this area and this helped.  The picture below shows Lynnie and Peter walking up out of the valley with Aster Lake off to the left in the photo. 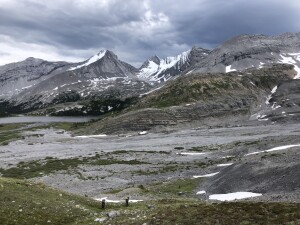 With this final up and around (you will pick up the trail again), you come to the tarns, which are in BC and our destination for the first night. Random camping is allowed here.  The picture does not do the site justice.  It is lovely!  But there are no trees for a bear hang and tons of marmots; a bear jar is a must.    If you do camp here, please take everything with you, TP and all.  It is a sensitive area so let’s keep it pristine. 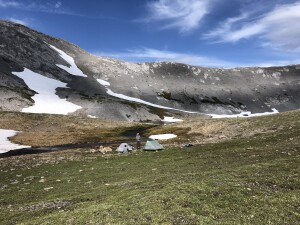 The next day, we did the final push up to the ridge.  This was our second sketchy piece of snow.  But with this bit of snow we were able to kick our boots into the snow and walk up.  And then we were on the ridge which was snow free and glorious!

Here’s a picture from the ridge looking back to our campsite. 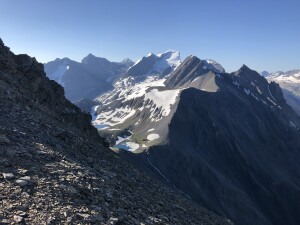 Here’s one of the ridge:

And here’s a photo from a safe point along the ridge looking back towards the sketchy bit.  I don’t remember the exposure feeling that bad and it certainly looks wider in the photo than I remembered.  But if you are queasy about exposure, why not turn around here?  Really.  Don’t prevent yourself from doing this hike because you think it’s too hard.  Better to turn around and see the best part of the trail twice from different directions!  And if you didn’t want to random camp, you could spend two nights at Aster Lake campground, it’s lovely. 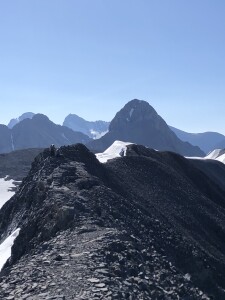 After the exposed bit, it’s pretty clear sailing.  There is another iffy part to the ridge, but you can hike around it (as I suspect most people do).  At the end of the ridge, there was a bit of a steep down on loose rock (which isn’t that nice but it’s okay) and then a snow run to Three Isle Lake.  We stopped at Three Isle for a quick dip and it was refreshing!  From Three Isle Lake, it’s pretty much all downhill back to the car.  There are lovely views of the valley and oddly you seem to go through a rain forest, which is beautiful.  Beyond this though, it felt like a bit of a slog after being on the ridge.  Alternatively, if you’re looking for a longer trip or doing the Northover as an alternate GDT route in Section C, you would head around Three Isle Lake and instead of turning right at the end of the lake towards Forks campground, you’d keep going around the lake and head towards South Kananaskis pass, Beatty Lake (great campsite there), onto Leroy Creek to rejoin the main GDT trail towards Palliser Pass or loop around to North Kananaskis pass, Turbine Canyon and out. 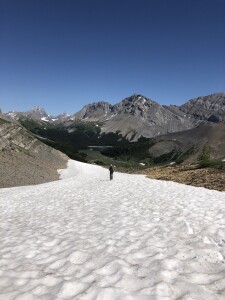 It’s been a few years since we did this hike but I have to say it was a pleasure writing about it.  During this time when we can’t do much (and anyway it’s winter), writing about the trip really brought me back to the trail.  If you have a hike on the Great Divide Trail that you enjoyed and want to re-live, think about writing an article for the newsletter (email: greatdividetrail@gmail.com)