A Day on the GDT – The Carthew Alderson Traverse

The Great Divide Trail (GDT) is a backpackers’ trail.  Known as an epic thru-hike, it is over 1100 km long.  Divided into seven sections, with the shortest section about 100 km long, section hiking also entices backpackers.  But what if one wants to do a day hike on the GDT?  On a trail that can be easily driven to?

The Carthew Alderson Traverse is a one-way, 20 km day hike in Waterton Lakes National Park.  It runs from Cameron Lake along the Akamina Parkway, to Cameron Falls in Waterton Townsite.  This stretch of the GDT is arguably one of the most beautiful.  It samples some of the best of what the GDT is known for – fir forests, creeks, waterfalls, meadows, turquoise lakes, high, barren passes, snowy mountain views that go on forever, and snow into July.  Shuttle service to Cameron Lake is available from The Tamarack outdoor store in Waterton Townsite.

It was late July 2016 and during a solo trip, on my way home from Regina, I found myself in Waterton Lakes N. P. as it had been on my “list” forever to come here and hike.  Only prepared for day hiking, I car camped at the drive-in campground in Waterton Townsite, did some shorter day hikes, and explored the town – cute town.  Stopping in at Tamarack Outdoor Outfitters (now named The Tamarack), I learned about the Carthew Alderson Traverse and their convenient shuttle to its trailhead at Cameron Lake.  Yes! this had to be hiked.  I signed up for an early morning shuttle, and continued exploring the Townsite.

Carthew Alderson Traverse Day, woke up early, had a big breakfast, packed two lunches plus snacks into my day pack, and off I went, walking over to Tamarack Outdoor Outfitters to catch the early shuttle to the trailhead.  Hikers had already started gathering on the front porch at Tamarack Outdoor Outfitters, milling around, introducing themselves, striking up conversation while waiting, as hikers do.  Mostly small groups.  Seeing I was alone, some invited me to hike with them.  I am old and slow.  They were all half my age or less, and likely much faster, so explaining a bit, I politely declined.  The bus showed up and we all piled in.  And we were off, up Akamina Parkway to Cameron Lake.  The chatting continued and before we knew it we were there.  Everyone piled off and headed for the trail.  Quite a crowd.  I held back so the fast, young ones could start first, not wanting to be continually passed in the first 500m.  Eventually, most were off down the trail, and a couple looking about my age, were still there with me.  They invited me to hike with them – Shannon and Serge from somewhere in BC.  Very nice people, and off we went, our Merry Band of 3.

The trail started flat, in the fir forest.  It did not disappoint; almost immediately we passed Cameron Lake with Mount Custer looming over its far end. 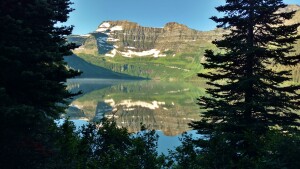 Continuing on at a steady, leisurely pace we enjoyed the fir forest as the trail began its climb.  The climb, on long switchbacks in the cool forest, was not very steep, quite pleasant.  Gentle enough to carry on a conversation (which of course, we did).  We soon noticed the trees had thinned as we had gotten higher. 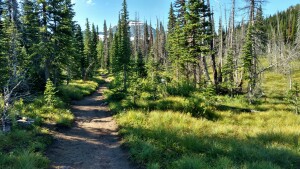 After a few kilometers we finished our last switchback (for now), and found ourselves in beautiful, green, grassy meadows.  We soon arrived at Summit Lake.  This is a very deceiving name; there is no “summit” here at all, and we still had a lot more uphill ahead.  But what a beautiful setting!  The tops of snowy Mount Custer and Chapman Peak poked up above the trees on the far side of Summit Lake. 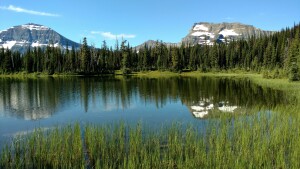 At Summit Lake, there was a trail junction.  One could continue straight and flat, and end up in the States, enticing, but not where we wanted to go.  Or one could turn left and start uphill again.  We turned left and started climbing again, gradually.  The scenery just got better and better.  The trail was on a hillside, with firs on the right.  On the left, a broad, very green valley of meadows and firs dropped off below.  And behind us in the distance was a wall of snowy mountains including Chapman Peak and Mount Custer.  The trail itself was lined with greenery and blooming bear-grass.  All just gorgeous! 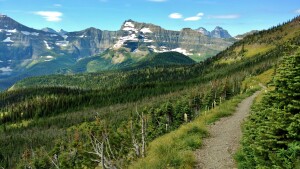 Mount Custer (distant center) to the south along the trail

After another few kilometers, still on the hillside, the trail curved left, and now above tree line, we found ourselves on a loose rocky slope.  Looking up the slope there was a barren, rocky saddle between two mountains – Mount Carthew and Mount Alderson.  And that was where we had to get to.  But it was still a ways off and the slope was steep.  Fortunately, once again there were long, gentle switchbacks.  And the trail was good… for a rocky slope.  We slowly made our way up, taking many scenic rest breaks along the way.  And they sure were worth it!  We had a better view of the green valley below.  And the remote North Lakes – Lake Wurdeman (left) and Lake Nooney (right), could now be seen between Chapman Peak and Mount Custer.  These lakes and the wall of mountains behind them, are all across the border, in the northernmost part of Glacier National Park in Montana.  This side of these mountains and the lakes at their bases are not accessible by trail (or road). 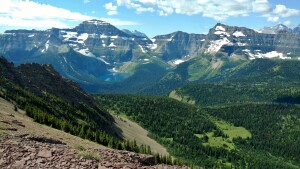 We finally reached the saddle.  It was breezy, but not unpleasant, and the view was great!  Now at the saddle, the view on the other side to the north, opened up.  It was a very different view, but just as awesome.  The three turquoise Carthew Lakes were strung out in a line into the distance in the valley below.  The steep rocky sides of this valley were the slopes of Mount Carthew ahead on the left, and Mount Alderson ahead on the right.  In the very, very far distance in the haze, we could see the prairies. 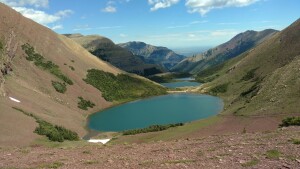 The trail went along the ridgeline of the saddle for a ways.  Behind, to the east, a shoulder of Mount Alderson rose up from the saddle.  And ahead was a shoulder of Mount Carthew to the northwest.  We reached the point where the trail turned right and started descending, and decided we didn’t want to leave these hard earned views yet.

Lunch time!  We sat down on the rocky slopes to eat.  We ate slowly, conversed, and just enjoyed the scenery on this beautiful bluebird day.  After quite a long break we packed up and our Merry Band of 3 was off again.

We descended the loose rocky slopes to the first of the three Carthew Lakes.  Here on the north side of the saddle, there were still snow patches in late July.  The trail crossed a snow patch that went right down to the edge of the lake.  The snowy slope above the lake was steep enough that we wished we had spikes, but we didn’t.  Carefully making our way across, we all made it without falling in the lake. 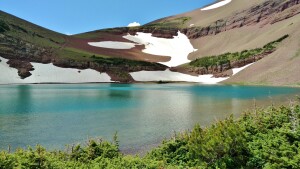 From here, the trail ran along the west shorelines of all three Carthew Lakes.  The lakes were connected by creeks, and the outlet creek of the third lake was Carthew Creek.  Leaving the third Carthew Lake behind, we descended down a short slope back into grassy meadows.  Veering right after this short descent, we met up with Carthew Creek cascading down as a waterfall.  The trail crossed Carthew Creek at a break in the waterfall and soon came to a short spur trail that led to Alderson Lake where there is a trail camp.

Traveling on and continuing to gradually descend, the trees, small at first, re-appeared.  Soon we were in a full-fledged fir forest.  In the forest, the trail ran in the Carthew Creek Valley for about the next 6 km.  Carthew Creek could be heard, but not seen, at the valley bottom.  The hike was getting long now.  The Merry Band of 3 was munching on trail mix as we hiked on down the forested valley.  It was a beautiful forest, but after the earlier dramatic views, we were all eager to get back to town.  After about an hour of this forest hiking, louder water sounds could be heard, and we reached the bend to the right in the trail where Carthew Creek emptied into Cameron Creek.  Now we followed Cameron Creek downstream on a steep hillside, with a view of Waterton Townsite below, in the not too far distance.

Before we knew it, our Merry Band of 3 popped out of the trees at Cameron Falls and paved road.  It was late afternoon, about 4pm, and we were all rather tired.  We wished each other well and said our good-byes.  What a glorious day!  What a beautiful 20 km of the GDT!