Paula Duncan, one of the first women to solo hike the Great Divide Trail, entertained a sold out crowd at the GDTA AGM on October 2nd, 2017. Paula kicked off her talk with why she prefers solo hiking. “I like it for many reasons, the most compelling of which is that I find it to be a more profound experience… I’m more mindful and more aware of what’s going on around me, experiencing nature on a deeper level, kind of like a mindfulness meditation.  I treasure the rare experience of being in places completely away from human generated sound.  Also walking at my own speed, going for as long or as short in a day as I choose and challenging my own route finding skills.” 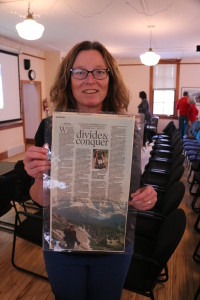 It’s been 11 years since Paula had her GDT journey and she had a lot of fun looking back on the trip in preparation for sharing her story with us. Here are Paula’s top tips for planning a trip on the GDT:

Returning from the trail is different for everyone.  After you’ve been on the trail for weeks, getting into the rhythm of walking with your pack on, you’ve probably formed a few new neurons, and then you’re back into “life”, and trying to fit yourself back into something that feels a little alien.  Hopefully you will be able to take some time, and ease into it; you get a little different sense of being, somewhat esoteric, difficult to explain to someone who hasn’t been there.  “I met this fellow, Robert Twigger, back from recreating MacKenzie’s trip from Athabasca Lake to the Arctic Ocean, in a handmade birchbark canoe.  He just looked at me, and said “Oh, you just got back, so you understand, don’t you”?  Neither of us could really articulate what that was about, but we definitely understood.”

Paula summed up how the GDT thru-hike stayed with her and affected her in four ways:

“Overall, what I took away ….  be a more mindful consumer, consume less, and I like the quote from Aldous Huxley “be a little kinder to one another.”

Paula has mostly lived in Canmore for the past 30 years, so she’s fortunate to have the opportunity to spend a good deal of time in the mountains,  She’s also been fortunate enough to travel and experience hiking in other countries.  Of all of the countries that Paula has visited Nepal had the greatest influence on her life. It gave her a first taste of long distance hiking as well as other profound life lessons.  Most striking was the exceptional generosity of the Nepalese people, many with less in their homes than what was in her backpack, but always willing to show hospitality and to share with no strings attached.  She came away with a profound appreciation and gratitude for her experiences and wanted to give back somehow.

Paula raised funds for Child Haven when she walked the GDT which meant creating media awareness for her thru-hike.  Child Haven was founded by an amazing inspiring Canadian couple, Bonnie and Fred Cappuccino. Bonnie and Fred had 2 children of their own, and then adopted 19 mixed ethnicity kids from around the world, back in the days when this was unheard of.  When that family grew up, Bonnie and Fred weren’t finished yet, they started homes for children in India, Nepal, Tibet and Bangladesh.   The homes operate on a Gandhian philosophy, so girls and boys are treated equally, and without regard to race, caste, religion.   The organization is secular, children are raised according to the highest ideals of their own cultures.  Paula’s been involved for many years with Child Haven, mostly with arranging past fundraisers for Child Haven in Calgary and more recently in the Bow Valley.  If you want to find out more about Child Haven, see www.childhaven.ca.

Thank you Paula for sharing your story with us!