Wildfires on the Great Divide in 2017

It was a hot and dry summer in the Canadian Rockies, and fire hazard conditions along the Great Divide were extremely high for most of the hiking season. Due to these extreme conditions, the summer of 2017 was one of the worst wildfire seasons on record in Western Canada and some of the larger wildfires burned so deeply that they may continue to smoulder underground over the winter (a frightening thought!).

Due to the dozens of wildfires burning, thick smoke, poor air quality and reduced visibility were common this year along the Great Divide. There were two wildfires in particular that caused significant closures and damage to the GDT: The Verdant Creek Wildfire and the Kenow Wildfire. 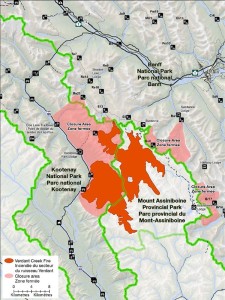 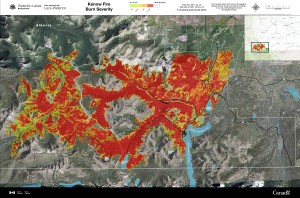 The Verdant Creek Wildfire was ignited by lightning on July 13 or 14 in Kootenay National Park. Due to hot and dry conditions in a remote location, the fire spread quickly. Parks Canada immediately closed a large section of backcountry in Kootenay and Banff National Parks which included the GDT from Citadel Pass to Ball Pass Junction. Similarly, the eastern portion of Mount Assiniboine Provincial Park was closed, including the GDT from Og Lake to Citadel Pass.

On July 16, strong winds intensified the wildfire and it spread quickly into Mount Assiniboine Provincial Park. 85 fire crew personnel, 40 pilots, 35 support staff were brought in to fight the wildfire. A significant amount of smoke was produced by the wildfire, filling the Bow and Columbia valleys, resulting in poor air quality advisories as far away as Calgary.

But on July 30, the weather turned for the worst. Hotter, dryer and high winds resulted in increased wildfire activity and brought the fire right up to the Great Divide and down to Highway 93. The highway was closed and fire crews worked hard to stop the spread of the fire and protect park facilities. Huge smoke columns were produced, and smoke filled the mountain valleys again, resulting in more air quality advisories. Trails in Egypt Lake area, Healy Pass and Sunshine Meadows were again closed, and Sunshine Village was again closed and used as a staging area for fire crews. All of Mount Assiniboine Provincial Park was closed. 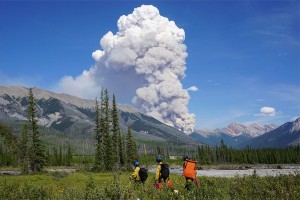 By August 5, the wildfire had spread down to Highway 93, with embers igniting several spot fires on the west side of the highway. Parks Canada closed further sections of the GDT, including the Hawk Creek Trail and the Rockwall Trail.

As the fire continued to spread, on August 8, the Vermilion Pass Guard containment line was re-established to create a fuel break and reduce wildfire spread to the Bow Valley. Helicopters continued to bucket hot spots while ground crews worked directly on the fire’s edge to contain the spread of the fire.

A shift in wind direction on August 9 permitted fire crews to carry out direct fire suppression work on the northern side of the fire using air and ground crews, and on August 10 Sunshine Village and some surrounding trails were re-opened to the public, and Highway 93 was re-opened. Conditions continued to improve and on August 20, all trails in the Egypt Lake area, Healy Pass and Sunshine Meadows re-opened.

Over the next few weeks, fire crews continued to make good progress to contain the remaining sections of the wildfire burning in remote areas of Kootenay National Park and Mount Assiniboine Provincial Park. On September 14, after cooler temperatures and some rain, the Verdant Creek Wildfire was considered being held. 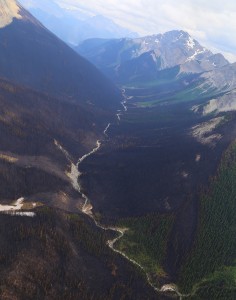 The Verdant Creek Wildfire burned mainly in remote areas of Kootenay National Park and Mount Assiniboine Provincial Park. It did not cross the Great Divide and fortunately did not impact any local communities, buildings or facilities within the parks. The GDT was also spared from damage but the trail from Citadel Pass to Sunshine Meadows remains closed.

The Kenow Wildfire was started by lightning strikes on August 30 on the slopes above Kishinena Creek in British Columbia’s Flathead Valley. Due to a period of unusually hot weather and high winds, the fire grew quickly and by September 2 it had expanded east 7 kilometres towards the Alberta border to a size of 4,500 hectares.

On September 4, the fire crossed the Divide and spot fires began igniting in Waterton Lakes National Park. Parks Canada closed all trails and campgrounds in the western portion of the park, including the Great Divide Trail. A national incident management team arrived on site in the National Park, along with three initial attack crews and five helicopters. The fire management team assessed containment options, and crews began working on facility protection. Additional fire management resources were requested. 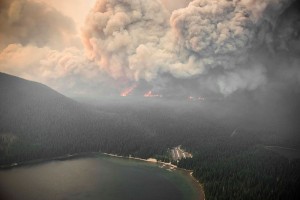 On September 6, Parks Canada issued an evacuation alert for all of Waterton Lakes National Park as the Kenow Wildfire continued to expand. As temperatures cooled overnight, smoke settled in the valley bottoms and Environment Canada issued a special air quality warning for the area due to significant wildfire smoke affecting air quality and visibility. Weather forecasts predicted hotter and windier weather conditions later that week which would increase the potential danger or hazards from the wildfire. Fire crews continued to battle the fire and protect facilities using water pumps and sprinklers throughout the park and Waterton townsite.

By September 8, the fire had grown to 7,800 hectares in size and an evacuation order was issued for Waterton Lakes National Park and Waterton Lakes National Park and Akamina-Kishinena Provincial Park were closed. By end of day, Parks Canada and RCMP had safely evacuated all residents and non-essential personnel from the park. Helicopters continued to work to reduce wildfire spread at Sage and South Kootenay passes by bucketing water. Fire crews removed vegetation from South Kootenay Pass and strengthened natural and human-made landscape features in the Akamina and Red Rock valleys to stop or slow the spread of the wildfire.

But weather conditions took a turn for the worse on September 10 when temperatures soared, humidity dropped, and high winds picked up. The Kenow Wildfire began demonstrating intense fire behaviour, burning quickly through 11.5 km of the Akamina Valley, growing to more than 10,000 hectares in size. Helicopters continued to bucket water, foam and retardant on spot fires along the Divide and crews conducted aerial ignitions in the Akamina Valley to attempt to steer the fire and reduce the potential of additional spreading. Intense fire behaviour, high winds and smoke severely reduced visibility and hampered fire suppression activities. 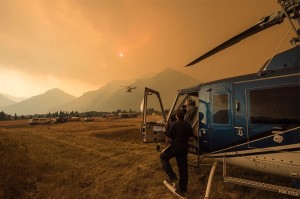 Additional crews were brought in, increasing resources to 185 personnel, 14 helicopters, 9 air tankers, 17 fire engines, and 16 specialized structural and wildland fire crews. A National Incident Management team set up high volume pumps, hoses and sprinklers to create a protective perimeter around the Waterton townsite and several other buildings in the area.

On the afternoon of September 11, the Kenow Wildfire crossed into Alberta over Akamina Pass and began demonstrating extreme fire behaviour for many hours due to high winds and critically dry vegetation. Over the next 8 hours, the wildfire would almost quadruple in size, growing to more than 35,000 hectares. Wind gusts up to 100 km/hour caused intensified burning and the fire moved very quickly northeast down the Cameron Valley along the Akamina Parkway towards the Waterton townsite. In the evening, fire became visible from the townsite and then on the north side of Crandell Mountain, soon surrounding the townsite on all sides except the lake. Firefighters worked tirelessly throughout the night to protect homes and facilities. Dedicated fire crews, high volume pumps and sprinkler systems, ensured the townsite perimeter held and the majority of infrastructure and facilities within the community were saved. Elsewhere, some buildings and infrastructure were lost to the fire. 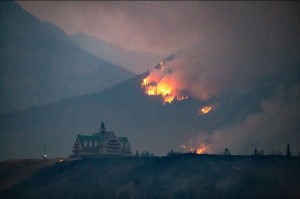 That night, the wildfire began to move north at a high rate of spread through the grasslands along the park’s Entrance Road towards neighbouring municipalities outside of the park. As the fire spread beyond the park’s boundary, mandatory evacuation notices were issued at 10:15pm for parts of the Municipal District of Pincher Creek, Cardston County and the Blood Reserve. Many residents were left scrambling to get out, unaware of how quickly the fire was spreading. Everyone was safely evacuated, but five homes were lost in the fire.

Also that night, the wildfire moved upslope from Sage Pass and crossed the Great Divide into the Castle drainage area. While the fire didn’t spread very far into the Castle area, several kilometres of the GDT were burned.

Over the next few days, cooler temperatures, higher humidity, lighter winds and rainfall provided some relief and reduced the wildfire’s behaviour. Ground and air fire crews continued to work to suppress and contain the fire, which continued to burn in some areas for several more days (and may continue to smoulder underground for much longer). On September 19, the Kenow Wildfire was considered being held, the evacuation order was lifted, roads re-opened, and residents were able to return to their homes. 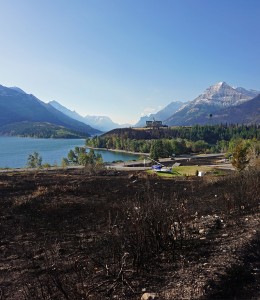 While some of the park has re-opened to the public, the GDT remains closed throughout Waterton Lakes National Park and the future of the trail in that park remains uncertain.

It is important to remember that wildfire is a natural process in the wilderness. Almost immediately after a fire, many wildlife species including birds, mammals and insects are often seen in burned areas. Fire opens up the forest canopy and allows more sunlight to reach understory plants, increasing productivity and biodiversity. Fire recycles nutrients stored in live and dead vegetation by converting it into mineral-rich ash. After a fire, pine cones pop open from fire’s heat, releasing their seeds; new growth sprouts from the roots of burned shrubs; flowers bloom and grasslands are reborn; and animals forage in the lush new growth. Over time, fires create a patchwork of burned and unburned vegetation. This diverse mix of habitats is favoured by wildlife and supports many species.

For hikers and volunteers anxious to hike or help repair fire-damaged trails, patience is required. Even after fires are considered out, there can still be hazards: saturated soils, landslides, roots and stumps that continue to smoulder, falling trees, and burnt out bridges. We will have to wait until next summer to determine the full extent of the damage. Some trails that have been damaged by wildfire may require environmental analysis or heavier engineering, and closures could be in place for many months, for the health of the trail and the surrounding landscapes as well as the safety of hikers and volunteers. The GDTA will continue to monitor and assess the condition of these damaged trails and provide updates as they become available.