Tales from the Trail: Section G – Kakwa to Robson

After completing the easiest section of the GDT last summer (section C, Field to Kananaskis), this summer Lynnie and I tackled the most challenging section, section G, SOBO from Kakwa to Mt Robson. An amazing achievement that would not have been possible without the help of Dustin Lynx.

Section G is a very difficult section and should not be undertaken lightly – route finding sometimes without GPS help, dubious water crossings, bushwhacking around deadfall and washed out campsites (Wolverine campsite on the North Boundary trail was completely under water), wading through thigh deep bog water, wet feet for the entire time, bugs, hiking in the dark, high mileage, not to mention the wet and miserable weather that we had on and off for days. Oh and then there was the curious grizzly who charged our campsite near Surprise Pass. In total 217 km (including walking part of the access road) was hiked over 10 days, 9 nights. The upside: spectacular views from Big Shale Hill, Surprise Pass, Fetherstonhaugh Pass, Jackpine Pass (pictured below), to name a few and an incredible sense of accomplishment. I would not have missed this adventure for anything! 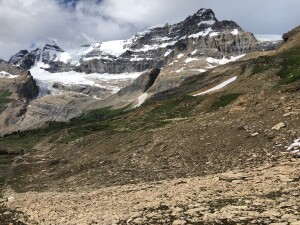 There were five of us on this trip: 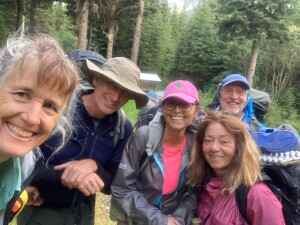 We all had a part to play, but I have to say that if we didn’t have Dustin Lynx with us helping with route finding and water crossings, the trip would have taken us a lot longer than it did. All anyone had to say was “Dustin’s leaving” and we would all quickly fall in behind him. A big shout out to Dustin for his expertise, leadership, calm demeanor and help in getting us through Section G!

Here are a few highlights of the trip…

The grizzly charging our campsite was certainly exciting! We were random camped just below Surprise Pass. After dinner, I was standing outside our tent, which was sheltered from the wind by some trees and slightly away from the others. I was looking off at the snow in the distance and then I thought a rock moved (in the picture below, the bear was on the skinny strip of snow, lower left). I wasn’t sure it was a bear because it looked so small and so I continued to watch it run across the snow and then the little guy stopped, and with its ears pointed up, stared at me for what seemed like hours but I’m sure was only seconds. I didn’t move, I was willing it to turn away. No luck there. It started to charge towards our tent. At this point, we sprang into action – walking with purpose to the others shouting that a bear was coming into camp and to get ready. We grouped together and shouted at the bear. He came over a small rise, probably within 100m of the camp, and then immediately veered off when it saw us (we’re a pretty mean looking group!), never to be seen again. Lynnie and I moved our tent closer to the others and from that night onwards we were more careful to camp close to each other. 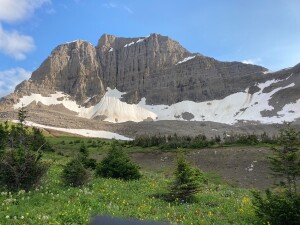 That same eventful day, we had our first rather dubious water crossing, defined here to be any water crossing where Dustin took off his pack and put his phone into a waterproof bag. Although it wasn’t a wide water crossing, the water was knee deep, roaring and really moving, and the rocks were slippery. Lynnie made it across safely, after a false start, returning and going again. I followed Lynnie and used my normal approach to dangerous situations – try to use momentum and get across as quickly as possible; to be honest I was afraid of the water. Not a good strategy for water crossings! I lost my footing on the slippery rocks and went down, to be fished out very quickly by Dustin (thank you again Dustin!). For the rest of the trip, I learned a ton about water crossings and even came to enjoy the challenge.

I don’t know if you’ve watched water crossing videos, but I have to say that none of them were as scary as what we encountered on Section G (as examples: Chown River and a bridge out are pictured below) and none of the videos included the advice that was really needed. 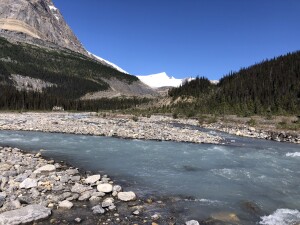 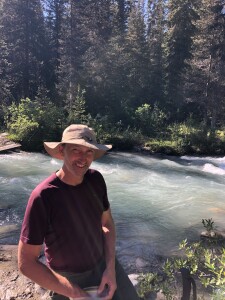 Here’s what I learned about water crossings from Dustin and Christine:

Despite having plans to do as many high alternate routes as possible (I love the ups!), the only high alternate route we did was Providence Pass High Alternate out of Kakwa. I’m not sure what the official route is like but the down on this puppy was horrible, a mud slide with trees to cling to and climb over. Everyone fell multiple times and thankfully no one was injured. If you do this section and find my water bottle, please can you put it into recycling. It must have come out when I did my spectacular dead turtle fall.

As for the other high alternates, there was too much snow, ice and bad weather for us to tackle them. We even did the low Jackpine River alternate, but this was more about fitness than anything else. With Dustin aware of the route, there were no route-finding issues and lots of great water crossing practice.

We also had many wonderful surprises on this trip.  We met up with Doug Borthwick (GDTA Board member), Brandon Bernadet (GDTA volunteer and GDT thru-hiker) and their friend Ernie on the way in and stayed with them at the Kakwa cabin (picture below). 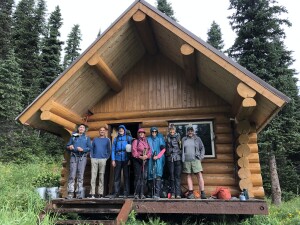 We met up with another young and very strong hiker, Lionel, (only the ninth person that we saw on the trail) at the moment we needed him most– the scariest water crossing ever. We camped in the most spectacular places… Mt. Bess Shoulder, for example (see picture below). And when it was getting late in the day, we were tired and had lost the trail because of blown down trees, we were able to backtrack a bit and find a wonderful, green, soft place to camp. And finally, when we thought we would never see the sun again… it came out! 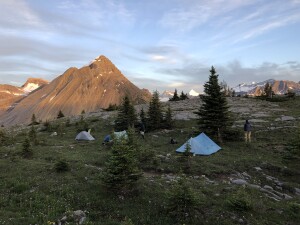 At times, with our wet feet, our clothes completely wet through, and with more rain pounding down, we did wonder, “is this worth it?” … And without a doubt, YES! We’ll be back on the trail next summer! 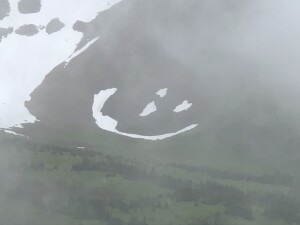