The Lovely Larch – Coolest Tree on the GDT

Every September, thousands of people make the pilgrimage up into the high subalpine reaches of the Rocky Mountains to take delight in the bright yellow hues of a curious conifer, the subalpine larch (Larix lyallii). Unlike other cone-bearing trees, which are evergreens, larches are deciduous like poplars, aspens, and cottonwoods. So, instead of the majority of their needles staying green and remaining on the trees all year, in the autumn larches shed their leaves, which just happen to be needles, and regrow new needles each spring. 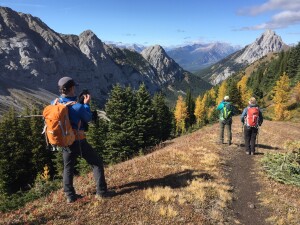 Why Would a Conifer Become Deciduous?

Why would larch invest so much energy growing hundreds of thousands of new needles every spring? It turns out there are many good reasons and that they enable subalpine larch to grow in the coolest places and thus be the coolest tree on the GDT. 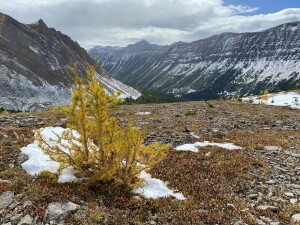 Adopting a deciduous habit enables subalpine larch to grow further up the mountain sides where the cool, harsh weather conditions prevail for much of the year. Larches begin to shed their needles in the fall when wind and snow squalls begin to take place regularly in the lead-up to full-on winter storms. By doing this, they eliminate a huge weight from their branches and reduce the surface area that the tree presents to oncoming winds. Snow can fall through the branches and land on the ground rather than getting stuck on the tree. Wind can sail past the naked branches, dissipating its force. These factors reduce the likelihood of branches breaking from the weight of snow or the force of the wind.

You will notice that larch has a straight trunk with a sparse and somewhat conical crown. The boughs are horizontal to the trunk, irregularly spaced and twisted. This maximizes the amount of sunlight a larch can access during the long days of summer, enabling its needles to photosynthesize effectively so that it generates lots of carbohydrates to store in its roots over the long high elevation winter.  However, this also presents a massive amount of surface area. Other conifers that grow in the upper subalpine near treeline such as subalpine fir and Engelmann spruce adopt a different growth form, with short branches that point down from the trunk so that they can easily shed any snow that falls on them and present little surface area to the wind. In addition, as larch needles do not get exposed to the desiccating winds and extreme cold of high mountain winters, like evergreen conifer needles, the moisture in larch needles does not have to be replaced by water in the soil, which remains frozen and inaccessible into late spring for many other conifers. 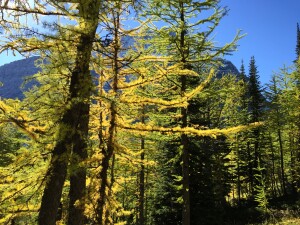 Unlike their evergreen neighbours, subalpine larch can have big horizontal branches because they drop their needles each fall

Also, the ability to recycle nutrients, especially nitrogen, through needle drop, is an important advantage in nutrient-poor environments like the thin soils and talus slopes in the mountains. Larches reabsorb a high proportion of nitrogen from their needles before these are shed, as much as 20 percent more than other species of trees. This provides the larch tree with a significant savings on an essential nutrient for the following year’s growth.

Shedding needles can also benefit the overall health of the tree. Larches use this seasonal shedding of needles to eliminate waste products, sending toxins taken in through their roots or from the air into the yellowing needles. By not having needles in the winter in Chinook-prone areas, larches also eliminate the risk of respiring when their roots remain frozen during periods of warmer than normal weather. Evergreens that begin to respire in warm conditions cannot replace the water they lose, killing the needles and sometimes the tree. This phenomenon, known as red-belt, appears as a band of trees with dead branches on a mountainside. The period of dormancy also appears to benefit this tree species’ health as much as good sleep helps promote human health. Experiments that provide larch with summer-like growing conditions all year long result in trees that sicken and die. 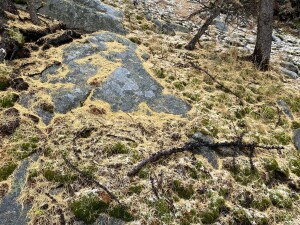 What Happens to Make the Larch Turn Different Colours?

What we see when the larch needles turn yellow is the result of the tree initiating that period of dormancy in response to shortening day length and lower temperatures. During the spring and summer larch needles house numerous food-manufacturing cells containing chlorophyll. This miraculous pigment absorbs specific wavelengths of energy from sunlight and uses that to transform carbon dioxide and water to carbohydrates, such as sugars and starch, which it stores in the roots. Chlorophyll cannot absorb and use green light energy (wavelength of ~560–520 nm). The cells that contain chlorophyll reflect that wavelength, making plants appear green. The needles also contain carotenes and xanthophyll pigments. For most of the year, these yellow and gold pigments get masked by the large quantity of green colouring from chlorophyll. However, once the needles stop their food-making process, the chlorophyll breaks down into its constituent parts that are stored safely in the roots for the winter. The green colour then disappears, and the yellow to gold-orange colours emerge, giving the larches their three weeks of autumn glory.

Meanwhile, at the spot where the stem of the needle is attached to the node on a twig or branch, a special layer of cells develops and gradually severs the tissues that support the needle. At the same time, the larch tree seals the cut, so that when the needle is finally blown off by the wind or falls from its own weight, a leaf scar remains. 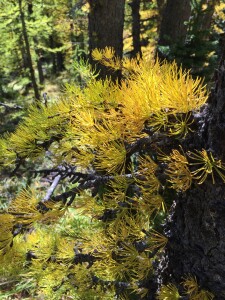 In the spring, nitrogen and the other parts of chlorophyll are brought out of winter storage and reassembled in new soft wispy needles that appear a light bright green. These deciduous needles have no need for waxy cuticles to protect them in winter, or for that matter, big doses of phenolic compounds to ward off winter herbivores, so they don’t require as much carbon as evergreen needles. Larch needles appear delicate but their design is effective in another way. Small and sparsely arranged along the branch stems, a high percentage of these needles get well illuminated since they shade one another to a lesser degree than do needles on evergreen conifers or even the broadleaves on many deciduous trees. This even distribution of light ensures full engagement in photosynthesis, the chemical process enabling green plants to make their own food. Larch needles are thus especially efficient and effective in making food to fuel the larch tree’s growth. 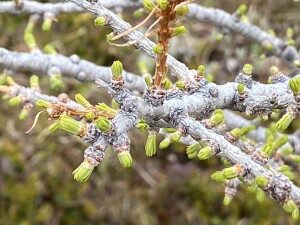 Pruning and Blazing Larches Along the GDT

From the larches’ perspective, the best time to prune them along the GDT is after they turn yellow, or better yet, during the dormant period after they shed their needles and before new ones emerge in the spring. According to GDTA blaze master, Dave Higgins, “In the hierarchy of blazing trees, they’re not quite at the top. That spot is earned by the subalpine fir. Next might be whitebark pine, if it weren’t for its protected status. Both these trees have bark that needs no scraping and one application of paint adheres very well for a long time. Larch has to be scraped and usually needs two paint applications with drying time in between. The bark of spruce is similar. Both are less than ideal because the bark continues to grow and flake off over time.” 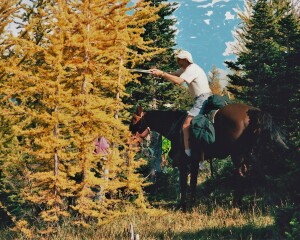 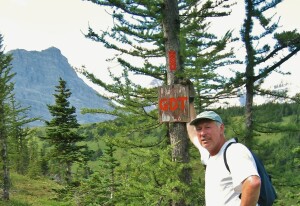 What Larch Species Can I See Along the GDT?

As the coolest tree along the GDT, subalpine larch lives at high altitudes near the treeline from 1,800 to 2,400 m (5,900 to 7,900 ft) in the Rocky Mountains as well as in the Purcell and Selkirk ranges of the Columbia Mountains. In the Rockies, the northern limit of their range is just a bit north of Lake Louise. A disjunct population flourishes in part of the Cascade Mountains. One can find it in the high cool places of southern Alberta and British Columbia, as well as north and east-central Idaho, and western Montana, and Washington State. 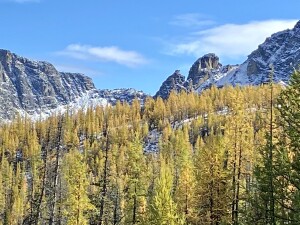 Besides subalpine larch, two other larch species grow along parts of the GDT: Western larch (Larix occidentalis) in the south and tamarack (Larix laricina) in the north. Like subalpine larch, they are deciduous conifers. 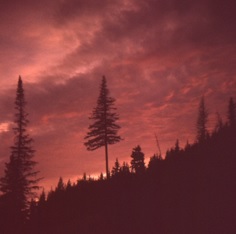 Western larch in the headwaters of Sage Creek, BC

Western larch occurs from southeastern BC and extreme western Alberta southward into eastern Washington, western Montana, northern Oregon, and northern and west-central Idaho. Western larch occupies relatively cool, moist climatic zones. Its upper elevational range is limited by low temperatures, while the lower extreme is limited by low precipitation. Its deciduous nature makes this species especially resistant to fire and resilient to injury. Larch trees can lose much of their canopy and still regrow their needles the following year. Its bark is also thick and protects the stem from fire. All these reasons give western larch a competitive advantage over other conifers where it grows.

The northern relative, the tamarack, tolerates extreme cold well and grows in the boreal forest zone of North America, extending down into the Eastern Slopes of the Rockies near Jasper. They can survive temperatures down to at least −65 °C (−85 °F), and commonly occur at the Arctic treeline at the edge of the tundra. Trees in these severe climatic conditions are smaller than the ones farther south, often only 5 m (15 ft.) tall. Their lack of winter needles means that they’re less susceptible to leaching of nutrients by winter precipitation than other conifers. They can also withstand extreme cold temperatures through a process called super–cooling whereby the tamarack tree cells dehydrate, pushing water into spaces outside their walls where crystallization won’t damage living tissue.

Some Good Places to See Larch Along the GDT

Seeing subalpine larch, especially during the fall when the needles display their spectacular golden hue, continues to be a source of joy and inspiration for mountain hikers. Growing numbers of people plan their fall hiking trips to areas specifically to view and photograph these “golden” trees. However, the increasing numbers in certain areas can disturb the peace and quiet and sense of solitude that many seek, compact and erode the soil, leave behind garbage and human waste, and disturb wildlife. So, GDT-ers, please be respectful of the larch, its fragile, high-altitude habitat, and other larch-lovers while appreciating this cool tree.

In my opinion, some of the best places along the GDT to see subalpine larch forests include: 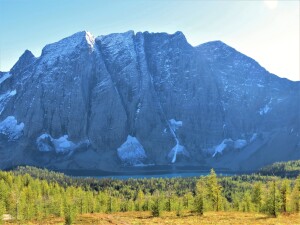 Subalpine larch forest between Numa Pass and Floe Lake along the Rockwall part of the GDT in Kootenay National Park, BC

Yo–yo hikers Dan Durston and his wife Tara Frey-Durston from Golden, BC thru-hiked the GDT from Waterton to Kakwa (northbound or NOBO) and back again (southbound or SOBO) in one season in 2017, so I asked them for their recollections about the larch they saw along the GDT.  Here is what Dan had to say: “We missed the prime larch season on our yo-yo because we had to stop the hike just as the larches were starting (early September) due to fire closures, and then didn’t resume until the end of October when they were largely over. However, I did notice some nice subalpine larch in a few areas and Tara also mentioned some nice areas from her SOBO hike last September. 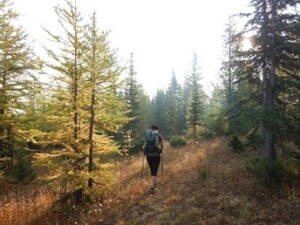 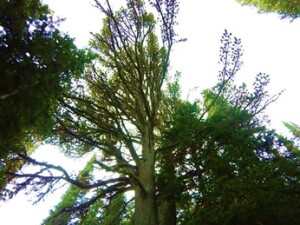 Then Section C (Lougheed to Field) has a lot of really good spots. The north side of Wonder Pass is loaded with great larch, as are most of the passes for the rest of the section. Particularly the passes just north of Sunshine, but also good spots along the passes on the Rockwall. I also note that the BC Big Tree Registry lists a subalpine larch at Wolverine Pass on the Rockwall that is the largest in BC (1.23m diameter). I haven’t stopped there to check it out, but hope to.” 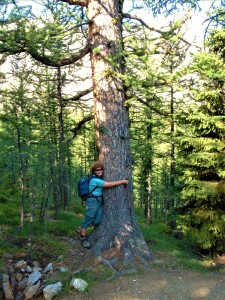 How can you not hug the coolest tree on the GDT?” says Jenny Feick near Wonder Pass, Mt Assiniboine Provincial Park, BC (Photo by Ian Hatter)

Jenny Feick took all of the pictures in this article unless otherwise noted.