In May 2020, the Alberta government rescinded, without public consultation, its 1976 Coal Policy, banning open-pit mining on Category 2 lands since they were deemed vital to environmental protection.  This decision to rescind exposed these Eastern Slope headwaters to coal exploration and strip-mining, and resulted in more than 350 new coal agreements.

As a result of an outcry across the province, on January 19, 2021, Alberta’s Energy Minister, Sonya Savage, announced a temporary pause on future coal lease sales and the cancellation of 11 coal leases.   On February 8, Minister Savage further announced a change of course, and that the Alberta government is “keeping the 1976 Coal Policy in place and committing to consult on a modernized policy”, and applications for additional exploration in former Category 2 lands will be prohibited pending “widespread consultations on a new coal policy”.

The Great Divide Trail Association (GDTA) is pleased the government appears to be listening to Albertans who seek a voice in land-use decisions that affect these valuable headwaters, sensitive ecosystems, and critical wildlife habitats. However, the threat certainly remains with many coal leases remaining intact.  Among these intact leases are lands at the northern end of Willoughby Ridge, overlapping 4.5 km of the Great Divide Trail (GDT) – See maps below. 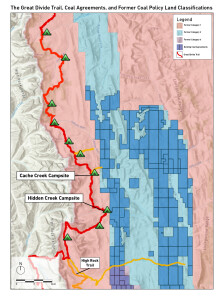 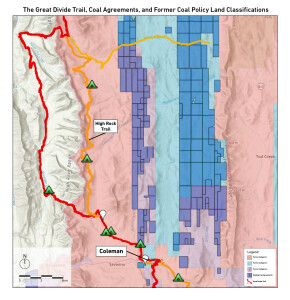 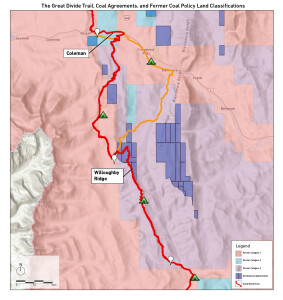 Coal exploration alone, including the installation of drill sites and exploratory roads, can negatively impact the environment and the GDT experience. However, the development of open-pit coal mining in or near the GDT’s corridor will most certainly negatively impact the world-class wilderness recreation experience the GDTA has worked hard to build over more than 40 years.  It will also reduce the environmental gains the GDTA has achieved while building and maintaining an environmentally sustainable trail along the Great Divide of the Canadian Rockies.

The GDTA joins the voices of those Albertans who advocate for rigorous and collaborative land-use planning, where attention to the long-term impacts on water, soil, wildlife, and Alberta’s unique wilderness legacy are fully factored into policy.