Identifying Tracks in the Snow 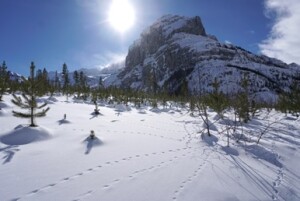 Snow provides a blank canvas for the artistry of wildlife tracks

Figuring out which creatures are sharing their home turf with you while you are passing through an area can provide an interesting diversion from cold oatmeal, blisters and fixing broken gear.  Winter snow provides a wonderful medium to record evidence of which animals have travelled through an area. Identifying tracks in the snow can be a bit like detective work. Consider every scrap of evidence while it exists. Snow is ephemeral and constantly changing so impressions can easily get distorted as the snow melts or sublimates, or tracks fill in with drifting snow, or get covered by debris and other tracks.

Be sure to get a good guidebook to track identification such as Louise Forrest’s Field Guide to Tracking Animals in Snow or a wildlife tracking app like iTrack Wildlife.  You can also set up a profile within iNaturalist.ca so that others can assist you identify tracks after you upload your pictures to iNaturalist, which contains a specific project devoted to animal tracks and signs.

Hints from the Habitat
Know where you are and what could be there. A variety of animal species live in the Rocky Mountains in the vicinity of the GDT[1]. It helps to know what animal species frequent the part of the trail you are on. In winter, you are most likely to see the tracks of mammals and some birds.  Few reptiles and amphibians live in the Rockies and the ones that do will be hibernating in the mud or deep in their dens. Fish will be under the ice. While some arthropods such as springtails and crane-flies can flourish in mild winters (another riveting story for another issue), they don’t leave tracks that most of us notice.

Are you snow hiking amid the Engelmann spruce and sub-alpine fir deep in a coniferous sub-alpine forest, a recently burned forest with young lodgepole pine emerging, or cross-country skiing through an open sub-alpine larch forest with its needle-less trees? Are you standing on a windswept alpine ridge or trekking over a tundra meadow? Or are you snowshoeing along an icy mountain stream, beside a frozen alpine tarn, or atop a frozen wetland with willow thickets in the valley bottom? The habitat provides clues as to what the tracks might be.  Red squirrels live in coniferous forests. River otter and mink are more likely to be seen along streams. Wolverines and wolves require large remote areas while mule deer and wapiti or elk tolerate human presence. 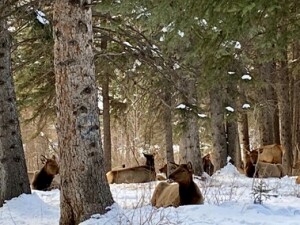 Elk bedded down in a park in downtown Canmore, AB in January 2020

Bird or mammal?
So, usually, your first question will be, “Am I looking at the tracks of a mammal or a bird?” The most conclusive features to confirm that the tracks are avian is if you see the imprints of feathers and/or the distinctive narrow three toes forward and one back that are characteristic of perching birds like chickadees or members of the jay family.

One of the birds most superbly adapted to mountain environments is the white-tailed ptarmigan. As it has feathered feet to protect it from the cold and a shuffling walk, the tracks can be confused with some small mammals. Like other so-called game birds such as grouse, their hind toe is small and thus not very visible. Although they can fly, ptarmigan generally prefer walking over flight to conserve energy in their unforgiving alpine habitat. In winter, this species occupies willow-dominated basins or riparian areas at or below treeline where they lead a very sedentary lifestyle, roosting in snow banks, and walking on top of the snow. 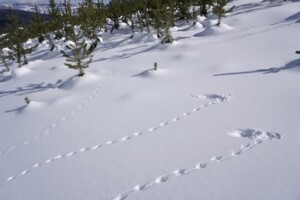 The characteristic tracks and snow roosting holes of the white-tailed ptarmigan adorn this snow slope.

What type of mammal?
If you have ascertained that the tracks you see do not belong to a bird, then you need to figure out what type of mammal made them. Is it a carnivore (meat-eater), an ungulate (hoofed animal), a rodent, or lagomorph (rabbit-like)? If it is a carnivore, you need to find out if it is a canid (dog-like), feline (cat-like), or mustelid (weasel-like)?  If you see claw marks, chances are the track if from one of the three wild canine species (in order of decreasing size, wolf, coyote, fox), or if associated with human tracks, a domestic dog.  You can also detect an X-shape between the paw pads as opposed to the arch- shape visible on wild feline tracks (cougar, lynx, bobcat). 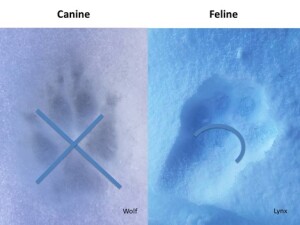 Numerous members of the weasel family live in the Rockies. You are most likely to see the tracks of pine marten. Count yourself lucky if you find wolverine tracks, which can be tricky to distinguish from the similarly sized wolf tracks since they sometimes show claw and foot drag marks. 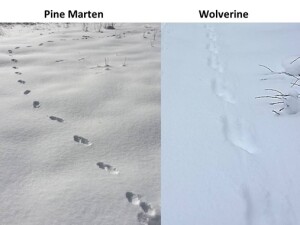 If the tracks belong to an artiodactyl (even-toed ungulate) is it a member of the deer family, a mountain goat, or a Rocky Mountain bighorn sheep? Artiodactyls tend to drag their feet, especially in deep snow, so look for drag marks. Regard the shape and size of the two toes visible in the cloven-hoof print and, if the snow is deep, look for the imprint of dewclaws. Measure the straddle (width between prints) and the stride (distance between steps), and compare these against the dimensions you will find in a book on animal tracks. Artiodactyls typically place their hind feet neatly into their front hoof prints. 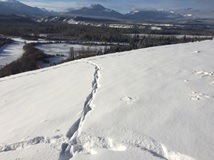 Rocky Mountain elk and mule deer leave the vicinity of the GDT to spend winter in the valleys where the snow is not so deep.

Track and Trail Tales
Refine your track identification by looking at an animal’s trail, the series of tracks in the snow. You can discern a lot just by noticing the track pattern in that trail, i.e., the distinctive arrangement of the paw or hoof prints that gives you clues about its gait.  To do that, you will need to follow the animal’s trail for at least several metres to get a sense for the animal’s most typical track pattern and to look for other clues to the animal’s identity, such as scat (animal feces), urine, blood, hair, depressions in the snow from where an animal has laid down, characteristic damage to vegetation from scent marking, thrashing, browsing, etc. 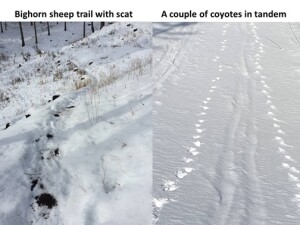 What Type of Track Pattern?
Another step in determining the type of animal whose tracks you are investigating is figuring out its track pattern. Three primary track patterns (with variations) exist: alternating, two-print, or four-print.  Alternating tracks show two parallel rows of tracks with the prints alternately spaced. This is the pattern humans make and is typically produced when an animal walks or trots.  The two-print track pattern has two tracks close together followed by a distinct space, with two more tracks after that, and so on. In the Rockies, the animals doing this were loping, bounding, or trotting. In the four-print track pattern, four footprints are grouped together followed by a space, and then four more prints. The most common example is created by rodents and lagomorphs as they jump or hop. Startled mule deer create a very unique clustered four-print pattern while “stotting”, i.e., when they jump off all four legs at once in Pogo-stick-like movements. 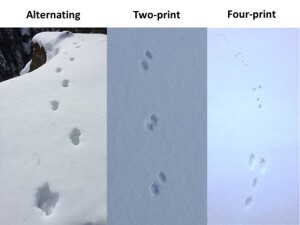 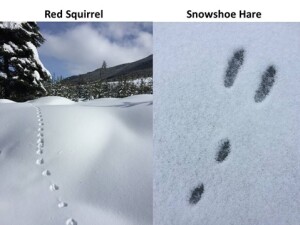 What about the little critters? Of course, for most of the winter, mice and especially voles stay under the insulating blanket of snow as a means of conserving energy and avoiding avian and mammalian predators. When they do venture forth in search of seeds and other food, making their tiny tracks in the snow, what evidence is left behind? How do you know if you are looking at mice or vole tracks?  Mice tend to make a four-print hopping track pattern with a distinct tail drag in the snow whereas voles characteristically make a two-print pattern with no tail drag when they jump along through the snow. 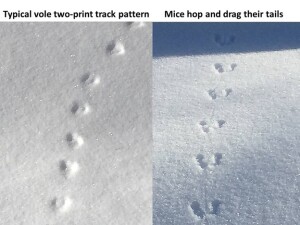 What’s the Story?
On some occasions an atypical track pattern proves indecipherable and mysterious. Other times, one feels intrigued by the patterns and cannot help speculate about what may have transpired. Sometimes one can see tracks of more than one individual of the same species. “Could this be a playful lynx kitten intercepting the steady plodding tracks of its mom?” you wonder. Or, you realize that the tracks you see represent different species. “Hmmm, this looks like a wolf following a snowshoe hare trail.” Tracks tell a tale for those willing to use their imagination and to take the time to observe. 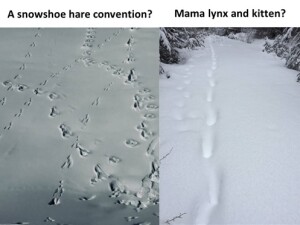 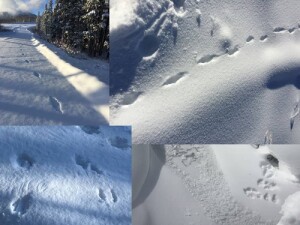 Mystery tracks clockwise from top left: What startled animal made these distinctively-shaped large bounding prints? Which creature made this alternating pattern with tail drag beside a snow covered log? Who emerged from its hole onto the frozen stream and then turned around and went back? These hopping and feather-like patterns suggest a bird, but which one?

While far fewer folks venture out onto parts of the Great Divide Trail in the winter, there can still be snow on much of the trail until June, with some patches lingering in summer, and snowfalls resuming again in earnest in the fall.  So, it is worthwhile investing some time and attention to develop and hone your snow tracking ID skills wherever and whenever you are out safely enjoying the great outdoors. 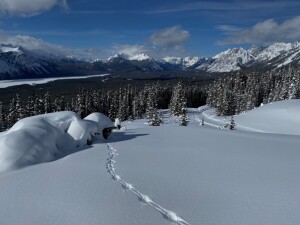 All photographs were taken by the author in the Canadian Rockies and Columbia Mountains.

[1] While there are over 50 species of mammals you could expect to find living year-round along the GDT, you are likely to only encounter the tracks of a small number of these during winter.  The most commonly observed tracks include mule deer, elk, moose, mountain sheep, wolf, coyote, cougar, lynx, pine marten, snowshoe hare and red squirrel, mice and voles.