Effective immediately, the GDTA is announcing a couple changes to the main route of the GDT as well as a fantastic new alternate route that appears in Dustin Lynx’s 3rd edition of his guidebook. These new routes are all reflected in the GDTA map and GDT App. 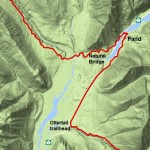 Field BC – From the Ottertail trailhead in Yoho National Park, the route no longer crosses the Trans-Canada highway to follow the railway tracks to Natural Bridge. Instead, walk next to Highway 1, northeast for 4.9 km until you reach a junction with a backroad on the south side of the highway.  This backroad continues north 3.5 km on the east side of the Kicking Horse River and becomes Stephen Avenue in Field, on which the post office is located. From Field, follow the Tally-Ho Trail 4.5 km to Natural Bridge. This re-route adds some additional distance but most thru-hikers will be resupplying in Field anyway. 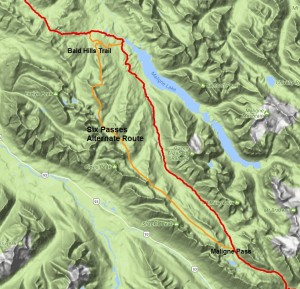 This is one of my favorite hikes of the entire GDT, a real gem. I’ve hiked and skied it. I loved it both times and I highly recommend it. I did not include this alternate in previous editions of the guidebook because of the viable trail and facilities in the valley. When the decommissioned Maligne River trail becomes impassible however, this alternate will be the only viable link for the GDT route through Jasper National Park. It does involve some easy scrambling but nothing like the Barnaby Ridge alternate in section A or the Coral Pass alternate route in section C. The route-finding is easy and the hiking is unparalleled for cross-country travel. There is plenty of water en route between each of the passes. Don’t attempt it too early in the season due to snow and caribou calving. Late July to late September is the optimal period. The caribou-rutting season begins in late September. Parks Canada advises visitors not to travel from then until late October. They won’t issue a random camping permit for the route during periods that are sensitive for the caribou.

The key to the alternate route is to line up all six passes and keep an eye on them as you descend through the subalpine valleys. This route follows the base of the unbroken and impressive escarpment of the Endless Chain Ridge. There are lakes, waterfalls, alpine meadows and continual vantage points. It is a strenuous route with a total 2057 metres elevation gain and 2597 metres loss. The route is suitable for running or fastpacking but there is technical footing in the lower meadows between the passes, where tussocks (small, grassy mounds) form.

From waypoint e22 at the shallow lake on Maligne Pass, hike cross-country 2.5 km up to Pass #1 at 2492m elevation. From there, look northwest and line up the next pass in the chain. Descend into the long meadow to a low point of 2023m at km 9.5. Climb steeply up to Pass #2, 2225m, at km 10.4. Still following the rock wall northwest, descend to a low point of 2065m at km 12.1. You ascend to 2315m Pass #3 at km 13.2. From Pass #3, the route goes slightly more north, descending to a low point of 1922m at km 15.9. It angles up to a Pass #4, east of Sympathy Peak at km 17.8 and 2228m. Descent to a marshy low point of 2084m at 19 km. Ascend past two alpine lakes to 2335m Pass #5 at 20 km. Finally, descend to 1985m at 21.9 km before climbing up to Pass #6 at 2260m and 24.9 km. Instead of dropping down over this pass, as you have become accustomed to, angle up to the barren ridge crest to the north. Follow this ridge crest right up to the cairn on the impressive summit at 2568m. The route follows the ridge that goes directly east from the summit, down through some steep terrain. Be careful not to dislodge a rock if you are following someone else. It is a brief but easy scramble down. The angle of the descent lessens as the ridge broadens. The now easy ridge walk curves to the north. Stay right on the ridge crest, clambering over a couple of minor rock steps, eventually joining the Bald Hills trail at 29.6 km at a cairn on a 2374m ridgeline summit. Good, signed trail brings you down the remaining 7 km along the ridge and then down through forest to rejoin the main route at the Bald Hills trail junction, 200m from the trailhead kiosk at the Maligne Lake parking lot.

Shortcut: There is a trail junction 2.5 km before reaching the parking lot – perhaps 750m down from the lookout, in forest. If you turn left, you will reach the Evelyn Creek campsite on the Skyline trail in 2.7 km and bypass the busy trailhead at Maligne Lake. This shortcut shaves 7.3 km off the main route, nearly making up for the extra distance of the entire alternate route.