Oh The Peaks You Will See: Veteran Peaks – Part 2

The idea for this historical look into mountains named for WWI people and events was inspired by a book given to me by friends, Canmore and Kananaskis History Explorer by Ernie Lakusta. The centenary of WWI is an opportunity to look at this world changing event, and no doubt those people who were exploring our Rockies felt that its monumental effect on the world should be memorialized in stone — thus the many Kananaskis peaks of the British Military Group.  North of Mount Indefatigable, discussed in the Spring Pathfinder, along The Great Divide Trail you will see Mount Sir Douglas and Mount Birdwood, our Veteran Peaks discussed in this Summer edition.

Mount Sir Douglas, in the Spray Range, was named for Sir Douglas Haig.  This imposing peak, which you will encounter between the Palliser and North Kananaskis passes, is 3411 m. Haig, commander of the British forces in France from 1915 to 1918, was the 1st Earl Haig of Bemersyde and the son of a wealthy Edinburgh distiller—his early advancement a result of patronage, and marriage to Queen Victoria’s maid of honour also helped! This mountain and Haig Glacier are named for a man who said ‘every position must be held to the last man…each one of us must fight to the end.’ And so they did. Under his command at the Battle of the Somme, 620,000 British and French men lost their lives. Haig’s ‘attack at all costs’ mentality was criticized by many, even by the British Prime Minister at the time, Lloyd-George. 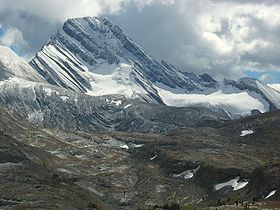 The first ascent of Mount Sir Douglas was in 1919 when Dr. J W Hickson hired Ed Feuz, a local Swiss guide, to join him in the ascent. They navigated to the twin summits handily by 5pm and left two cairns on each summit which can still be seen from Palliser Pass today.  At the same time, another party, lead by Swiss guide Rudolph Aemmer, and including a colleague of Feuz’s, Val Fynn, was in the area hoping to be first to the top. Passing by the Aemmer/Fynn camp next day, Feuz commented to Fynn’s wife “I wonder why they didn’t go our way, where we went yesterday?” Feuz responded to the dumbfounded wife with a cheeky “Don’t worry, that ridge Rudolph and your husband are on will make a fine second ascent.” 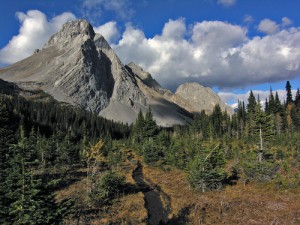 Had Dr. Hickson and Feuz looked north from the twin summits, they would have seen a spectacular looking mountain perched along the Spray River Valley: Mount Birdwood. Ah, finally a name that conjures the picturesque and natural; however, it was named for Sir William Riddell Birdwood. Known as ‘Birdy,’ this British commander lead the Australian and New Zealand corps in WWI. The first ascent of the 3097 m peak was in July 1922 and led by a familiar name, Rudolph Aemmer. Near the top they reached a chimney with smooth sides and few handholds. After 7 ½ hours, Rudolph summited Mount Birdwood by standing on a fellow adventurers back, perching on his shoulders, and finally reaching the top with a supporting shove. Some times you just need that extra friendly push to go the distance on the Great Divide Trail!